VOTE NOW: Choose your Offaly Sports Star of the Month for November 2018 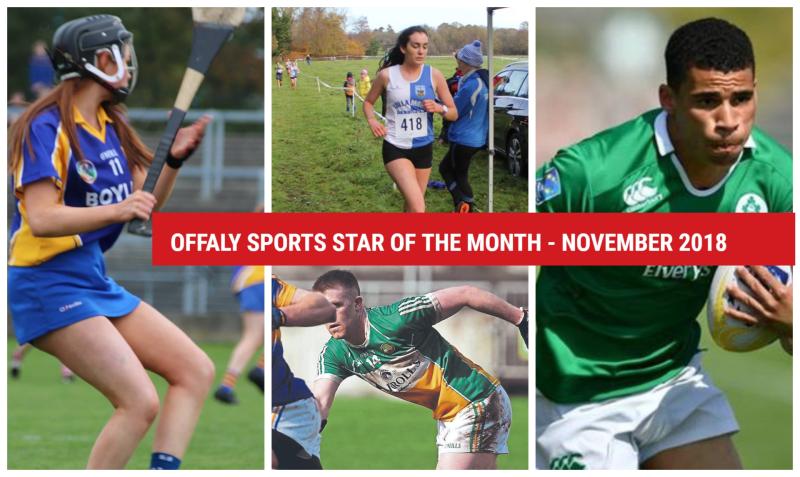 VOTE NOW: Choose your Offaly Sports Star of the Month for November 2018

It's been another bumper month of sport for Offaly with athletes excelling on the national and international stage.

The nominees for the November 2018 award are:

Jordan Conroy - Tullamore man Conroy was in stunning form as he helped Ireland Rugby 7s win the Dubai 7s International Invitational tournament. Conroy scored 12 tries in six games during the tournament, including a last-gasp try in the Cup Final against South Africa, the same side they had lost to at the quarter-final stage in 2017.

David Egan - The ever-committed Egan was a key cog in the St. Brigid's wheel, bringing the Croghan club all the way to the Leinster Club Junior Football Championship Final. Egan scored 0-6, including four pinpointed frees in a tense 1-11 to 1-7 victory over Milltown in the semi-final.

Kate Kenny - The ultimate dual star, Kate Kenny was named Ladies Footballer of the Year and Camogie Player of the year at the Offaly GAA awards in November. She was instrumental as both of her clubs, Naomh Ciarán in football, and St. Rynagh's in Camogie, claimed their respective county championships. She also went on to represent both clubs in Leinster finals, losing out to Clontarf in football and beating Young Irelands of Kilkenny in Camogie where Kate scored 1-4.

Ellen Regan - The daughter of Offaly All-Ireland winner Daithi Regan scored a whopping 0-9 in Birr's U16 A O’Meara Sliotars Offaly Camogie final win over KK. The towering forward rallied her teammates with the personal tally in the 2-11 to 3-6 win over Kilcormac-Killoughey.

Nigel Dunne - Shamrocks had a fairytale run all the way to the AIB Leinster Club Intermediate Football final, led supremely by captain Nigel Dunne. Dunne was the main scoring threat for the club as they overcame Ballinabranna in the quarter-final, and Horsewood in the semi-final during November. The Offaly star led the line all the way to the final where they ultimately lost out to Two Mile House. Dunne scored 0-8 on the day.

Darragh Kenny - Kenny won the three-star Grand Prix at Sentower Park in Belgium in November, just ahead of fellow Irish rider Denis Lynch in second. Darragh partnered the 10-year-old gelding Carlson to the fastest clear in a 10-horse jump-off, crossing the line in 36.84 to take the winners prize of €7,500. It was the latest in a string of victories in 2018 for the Offaly rider.

Roisin O'Brien - History was made by Tullamore Basketball Club's U18s girls team with a first-ever win in the National Cup against the fabled Killester Basketball Club. The Dublin club had two Internationals on their team but thanks in no small part to a player of the game performance from Roisin, Tullamore pulled off a memorable win. Roisin put in an incredible defensive shift, helping to hold Killester to 56 points, while she also netted seven points of her own in the 72-56 win. This win qualified the girls for the knock out stage where they lost out to competition favourites St Marys of Castleisland.

Lauren Kelly - The Edenderry fighter beat Renee Roche from Castlebar in the 75kg weight class at the National Senior Championships in Dublin's National Stadium. Lauren also became a youth Olympian in 2018 and is now an eight-time national champion having taken the step up to senior level in her stride.

The voting will remain open until 11pm on Sunday, December 16.

The winner will receive a specially commissioned glass trophy from title sponsors Guy Clothing in Tullamore and will go forward for the ultimate Offaly Sports Star of the Year award in January.