VOTE NOW: Choose the Offaly Sports Star of the Month for May 2018

It has been an incredible month of sport for the county 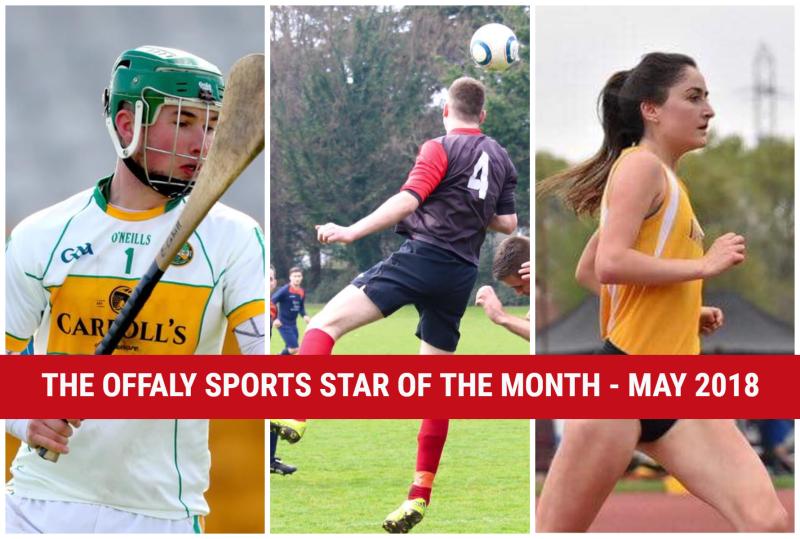 VOTE NOW: Choose the Offaly Sports Star of the Month for May 2018

May was a fantastic month for Offaly sport with our minor hurlers winning three on the bounce, the minor and U20 footballers picking up wins, and athletics, showjumping and rowing stars rising to international success.

We have compiled a shortlist of eight nominees and it's not over to you to crown the Offaly Express/Guy Clothing Sports Star of the Month for May 2018.

The winner will receive a specially commissioned glass trophy from our proud sponsors, Guy Clothing in Tullamore.

These are our eight nominees for the award:

Aaron Kellaghan - Aaron Kellaghan could well be the latest wonderkid to come out of Rhode, and he confirmed his potential with a 1-3 haul for Offaly in a crucial 1-12 to 1-9 win over near neighbours Westmeath in the Leinster Minor Football Championship.

Cian Johnson - The Ferbane sharpshooter put the disappointment of being pulled from the senior football panel by the county board to the back of his mind and registered a personal tally of 1-7, all from play, for the Offaly U20 set-up. Offaly beat Carlow in the opening round of the U20 Leinster Championship on a 2-19 to 1-10 scoreline.

Eoghan Cahill - The Offaly stopper endured a tough time between the sticks for the Offaly hurlers in May, but despite conceding 12 goals in three Leinster Championship matches, the Birr man made his championship debut against Galway and made a series of incredible saves in all three of those games in May.

Aaron McDonnell - The Edenderry Town F.C player hit the headlines in May as he struck both goals in a brilliant 2-1 Lummy O'Reilly Cup final win over Portlaoise. Edenderry had secured the league title just days earlier with McDonnell's brace putting the seal on an incredible month for the club.

Cathal Kiely - The Offaly minor hurlers collected three wins from three in the Leinster Minor Hurling Championship and Cathal Kiely was one of the stand-out performers, finding the net in all three games. He scored 1-9 against Antrim, 1-7 against Meath and 1-11 against Kildare.

Darragh Kenny - The Offaly showjumper was in sublime form stateside in May, picking up big wins in the $131,000 Mary Rena Murphy three-star Grand Prix in Kentucky and the $131,000 Hollow Creek Farm Grand Prix in Lexington a week later. Darragh confirmed his status as one of the biggest stars in Irish showjumping.

Niamh O'Connor - The Tullamore Harriers athlete set a new club record for the 5000m in America in May. Niamh ran 16:34.22 at the IC4A Track and Field Championships in Princeton University's Weaver Field when she finished fourth in the 5000m. Niamh's time becomes the club record, replacing the mark of 16:38.00 set by Pauline Curley when she finished third in the Irish National Senior 5000m in July 2006. Niamh O’Connor also won the 10,000m event at the MAAC Outdoor Championships in New York in May.

Roisin Byrne - The Offaly rower saw off competition from all over the world to claim victory in the Under 12 single sculls event at the Ghent International Regatta in Belgium in May. The victory confirmed Roisin's potential and her status as one of the rising stars of Offaly rowing.

Paul Egan - Man of the match and captain as Birr regained the prestigious Counties Cup after a 21 year wait. Ran the show in midfield as hie team saw off Rosenallis after a penalty shoot-out

The voting will close at 11pm on Wednesday, June 6. The winner will be announced on June 7. The winner will receive a specially commissioned glass trophy from title sponsors Guy Clothing and be entered in the end of year poll to crown the Offaly Sports Star of the Year for 2018.