VOTE NOW: Choose the Offaly Sports Star of the Month for April 2018

There were a number of stand-out performers 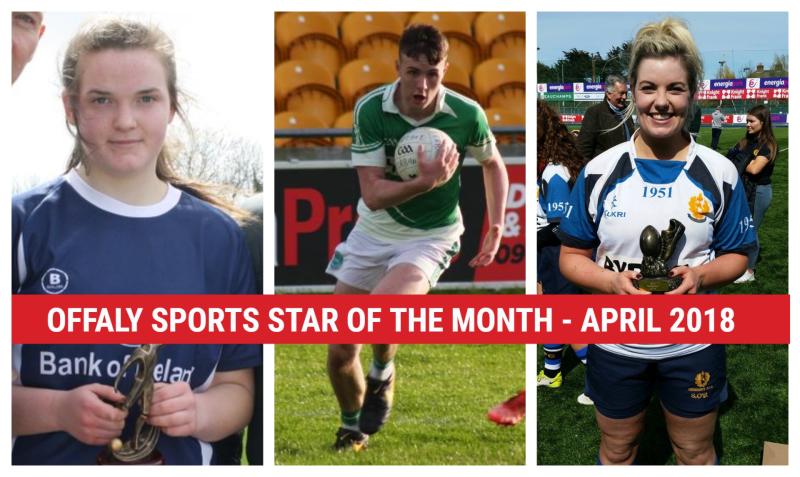 VOTE NOW: Choose the Offaly Sports Star of the Month for April 2018

April was an impressive month for Offaly on the sporting front with stand-out performances in the fields of GAA, rowing, boxing, rugby, camogie and soccer.

We have narrowed this month's vote down to eight contenders, listed below, and it is now over to you to select the winner. The voting will remain open until Bank Holiday Monday, May 7 at 11pm. The winner will be announced on May 8.

The winner will receive a specially commissioned glass trophy provided by title sponsor of the Offaly Sports Star of the Month awards, Guy Clothing in Tullamore.

Ciaran Brady - Offaly Rowing - Ciaran was once again in flying form as he took the gold medal in his individual race in the intermediate class at the Neptune Regatta on the River Liffey.

Michaela Morkan - Offaly Camogie - Michaela put in a barnstorming display, scoring 0-4, and inspiring her teammates to a 3-17 to 1-7 win over Meath in the Littlewoods Ireland Camogie Division 1 relegation play-off.

Lauren Kelly - St. Brigid's Boxing Club - Lauren Kelly put on a classy display in Italy, overcoming her Turkish opponent in the quarter-finals of the European Youth Boxing Championships. She captained the Irish girl's team at the event and picked up a bronze medal despite her semi-final defeat.

Joe Maher - Ferbane GAA - Joe Maher was in free-scoring form in the Offaly Senior Football Championship in April as he collected a personal tally of 1-12 in his club's win over Gracefield.

Ava Dolan - Killina Presentation Secondary School - Ava was the captain and player of the match as Killina claimed their first FAI Schools Minor 'B' National Cup title against defending champions, St. Mary's, Newport, in the decider.

Cian Johnson - Ferbane GAA - Johnson proved his class and huge potential yet again at senior level as he scored 3-6, all from play, for Ferbane in their Offaly Senior Football Championship clash with Gracefield.