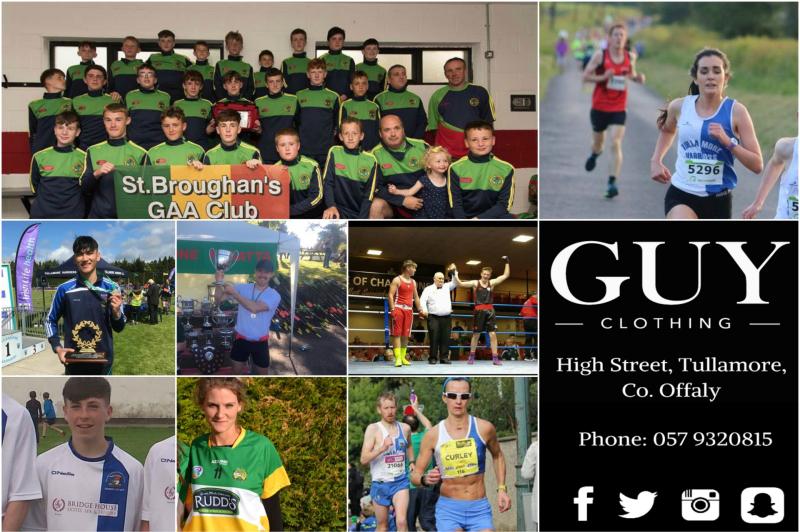 After much deliberation, the shortlist of eight for the Guy Clothing/Offaly Express Sports Star of the Month for June has been finalised and the public are now invited to vote for the winner.

There are eight nominees for the inaugural award as part of a new partnership between Guy Clothing in Tullamore and the Offaly Express. The awards programme recognises sporting excellence across all sports and levels. The June nominees are as follows:

Eoin is an up-and-coming footballer at Tullamore Town FC and in June, he represented the Midlands Soccer League team at the Kennedy Cup competition in Limerick. The team, who had seven Offaly representatives, went all the way to Kennedy Bowl success, beating Dundalk in the final. Eoin Gavin was instrumental as he scored all of the team's four goals during the competition, including a blistering winner in the final.

St. Broughan's U14s caused a stir this month at the GAA's Feile na NÓg competition. After working hard to reach the national stage of the tournament, St. Broughan's made their way through their group to the Division 1 Shield decider against Gowna, a Cavan GAA club. Broughan's saw a legitimate point waved successful by the umpires but not registered on the scoreboard or by the referee, and at the final whistle, Gowna were declared the winners by one point on a scoreline of 3-8 to 3-7. A protest followed and the GAA are now investigating the circumstances of the controversial defeat for the Offaly team. St. Broughan's were deflated but were met with a large homecoming despite the perceived injustice, with banners emblazoned with the slogan, "Still our heroes."

Former Olympian and Tullamore Harriers club member Pauline Curley showed she retains as much ability as ever as she pushed herself all the way to victory at the Waterford Marathon in late June. She registered a time of 2.52.59, enough for third overall. Pauline Curley has been a star of Offaly, Irish and international athletics for many years and her win in Waterford showed just how much dedication and passion she still has for her sport.

Ciaran Brady out-battled stiff competition from around the country at the Athlone Regatta recently as he picked up the Men's Senior Single Scull title in the sun on June 17. Ciaran, a long-time member of Offaly Rowing Club, has won countless titles over the years at all levels, and his win in Athlone proves he is at the very top of his game.

Young Edenderry boxer Darragh Farrell makes it onto the list after his win at the Junior Cadet Championships at the National Stadium late last month. 14-year-old Farrell only picked up boxing in 2015 and since then, he has lost just once in competitive action. In June, he made amends for that sole defeat at the Cadets in 2016 by overcoming a tough opponent from Cork and booking his place at the European Schoolboys Championship this summer. Fighting out of St. Joseph's Boxing Club in Edenderry, he is already a three-time All-Ireland champion.

Mary is a key member of the Offaly Junior Camogie team and she was the player of the game when they won their Leinster title against Wicklow in June. The teams had drawn the first game but in the replay, Teehan led from the front and inspired her team to an historic win. The Naomh Bríd native covered every blade of grass as joint captain and was deservedly awarded the accolade from Leinster Chairperson Pat Martin on the day.

Jordan Hoang won the senior boys' triple jump in the All Ireland Schools Track and Field in a record of 14.84m and has posted two qualifying times for the European Junior Track and Field Championships in Italy. The Tullamore Harriers athlete is awaiting selection onto the Irish squad after a splendid month for the teenager who took time out of his Leaving Cert studies to win the triple jump competition and compete in the UK.

Tullamore once again hosted the National Under 20 and Under 23 Track and Field Championships in June and Nadine emerged as a star. She won her first national title in great style in the U23 5,000m event. Nadine was in powerful and unforgiving form as she won by twenty six seconds, a huge margin in a national championships. Her time of 18.05 was ultra impressive as she continues to be one of the shining lights of the Tullamore Harriers club.

VOTING CLOSES ON FRIDAY AFTERNOON WHEN THE WINNER WILL BE ANNOUNCED!