VOTE: Take your pick from the Final 5 in our search for Offaly's greatest ever sportsperson? 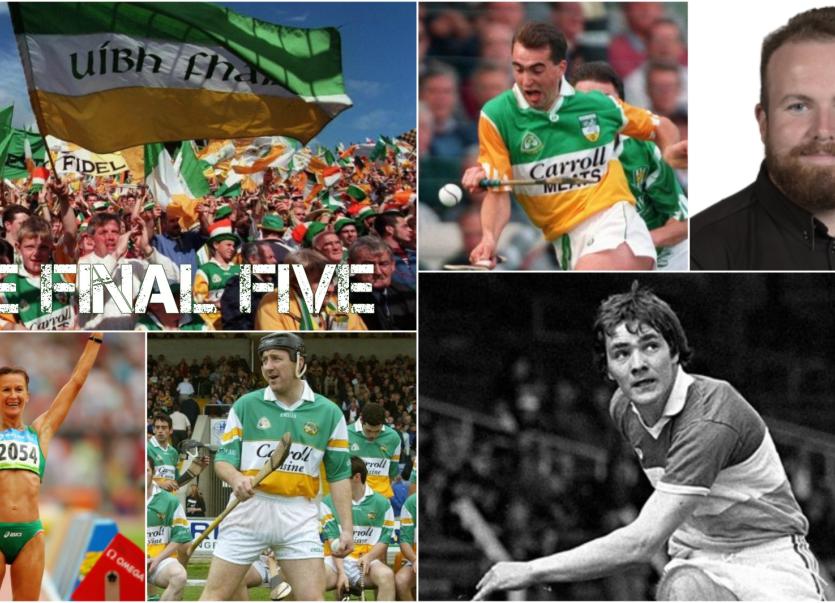 Thousands of you have voted so far, and now we have found our Top 5 Greatest Offaly Sportspeople of All-Time - Two hurlers, an Olympic hero, a footballing great and a rising golfing star.

At the end of our poll, where you had the choice of dozens of sporting legends, our Top 2 could not be separated at 16% each. Given the debate it created, and the sporting lines that were drawn around the county, we are giving you until Sunday, March 12, at 11pm, to choose the greatest ever once more.

If you need some inspiration as to who to vote for, these our the sporting stories of our final 5:

Lowry is knocking on the door of the world's Top 50 in the golfing world rankings, and in 2015, wrote himself into the history books when he won on the PGA Tour, securing the Bridgestone Invitational with some simply sublime golf. He came to nationwide attention all the way back in 2009 when he arrived at the Irish Open as an amateur and became the first amateur player in almost 50 years to win a European Tour event against the professionals. He soon followed those players into the pro ranks and won the Portugal Masters in 2012. Lowry is already considered one of the top brass of Offaly sports stars, and may well rise further in years to come as he chases Major glory.

Dooley is a legend of the Seir Keiran club and is one of Offaly's finest hurling exports. He won four club county titles with Keiran and soon went on to inter-county success. He was instrumental for Offaly in winning a National Hurling League title, two Leinster titles and two All-Ireland crowns. The first of these came in 1994 when Offaly scored 2-05 in the last five minutes to claim the title at the expense of Limerick. The second came following Offaly's sit-down protest after the 1998 final was blown up early against Clare at Croke Park. Offaly won the replayed game and went on to beat Kilkenny to secure a truly surreal win for Offaly fans. Dooley was also named an All-Star on three different occasions and is regarded as one of the most gifted hurlers to have ever played the game.

Pauline Curley is a legend of the Tullamore Harriers athletics club, and one of Ireland's finest natural athletes. Pauline's talents were always undeniable but her crowning glory came at the tender age of 39 when she qualified to represent Ireland in the Women's Marathon at the 2008 Beijing Olympic Games. The work required to reach such an elite level at an unorthodox age is exceptional, and Pauline finished 63rd in Beijing with a time of 2:47:16. In the same year, she achieved her personal best of 2:39:05 at the Fortis Marathon in Rotterdam. In 2015, in her mid-40s, Pauline rolled back the years when she was the fastest woman in the 2015 Dublin City Marathon. Her achievements know no bounds and she deservedly sits in this top 5.

An absolute giant of the game of football. Matt Connor is a Leinster GAA Hall of Famer and three-time All-Star award recipient. He started playing GAA with his club, Walsh Island, with whom he found major success. He won six club county titles with them and was an instrumental part of the team when they won two Leinster club titles and an All-Ireland club title. With Offaly, Matt was one of the most powerful forwards to ever pull on the Faithful jersey, and he won three Leinster titles with his county and an All-Ireland in 1982. Matt's performance in scoring 2-9 in the 1980 All-Ireland Semi-Final against Kerry is considered one of the best personal displays in the history of Gaelic Football. Matt Connor was paralysed from the waist down in a car accident in 1984 aged just 25, cutting short the career of Offaly's most talented footballer ever, who had already achieved so much up to that point at the age of just 25. Like legendary commentator Mícheál Ó Muircheartaigh once said of Matt: "Nobody had ever perfected the skills of Gaelic Football better than him."

The sight of Brian Whelahan marauding down the pitch with the sliotar on his hurl in his open-faced yellow helmet will live long in the memories of a generation of Offaly supporters. Whelahan was a leader, and throughout his career, galvanised all around him to fight for every second, every inch, every half-chance until the bitter end. Whelahan played with his club until 2009, and during a more than 20-year club career, collected 12 Offaly county championship medals, seven Leinster club titles and four club All-Irelands with Birr. At inter-county level, the wing-back won three Leinster titles, two All-Irelands and four All-Star awards. He also picked up the Hurler of the Year award on two occasions and was named at left wing-back on the Hurling Team of the Millennium. Whelehan is not just an Offaly legend, he is an absolute legend of the game - one the finest ever.

Scroll back up to the top of this article to vote for who you think is the greatest Offaly sportsperson of all-time.