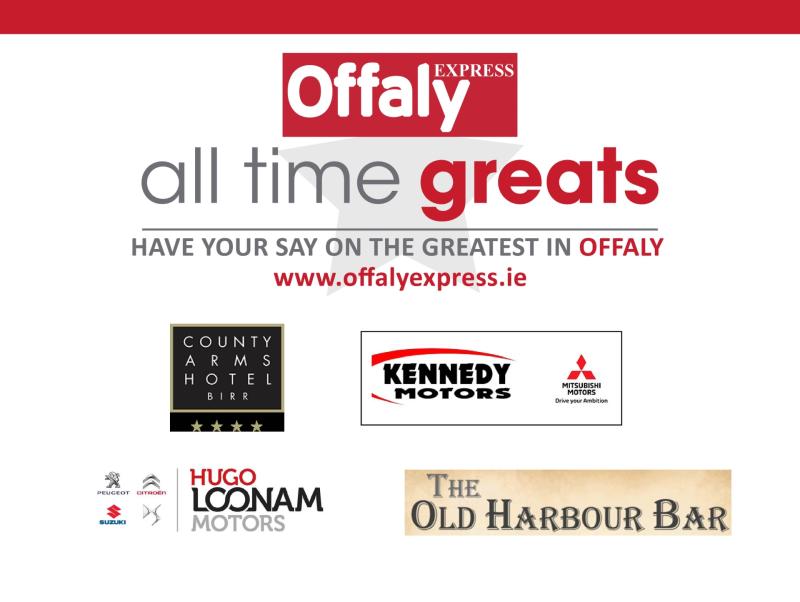 A shortlist of 16 was drafted with some of Offaly's finest exports drawn from the areas of sport, politics, music, television and business duelling it out for votes, and following a week of voting, we now have our semi-final line-up.

One of the greatest forwards in GAA history, Offaly's Matt Connor was the country's leading scorer for three years in a row from 1980 to 1982. His 2-9 scoring haul in a defeat against Kerry in the 1980 All-Ireland football final will go down in history, a feat eventually rewarded with an All-Ireland medal in 1982.

He was a three-time All-Star winner, and also an All-Ireland winner with his club, Walsh Island during a glittering, yet short career, ended by a car accident in late 1984. The Tullamore based garda was just 25 when he career was ended prematurely, and yet, he had reached the summit of our national game.

Rhode man Pat Smullen is a nine-time Irish champion flat jockey, one of the most successful of all-time. He began his career in racing as a young apprentice with Joanna Morgan, before going on to forge a formidable partnership as retained rider with Curragh-based trainer Dermot Weld.

In that guise, Smullen has achieved success all over the world, from the 2,000 Guineas in Britain to the Breeders' Cup Marathon in the United States. He is also a dual Irish and Epsom Derby winner, a feat he achieved in the same season in 2016 aboard the Dermot Weld-trained Harzand.

In 2017, Pat was forced into an indefinite break from the sport after a pancreatic cancer diagnosis, which he continues to fight following surgery.