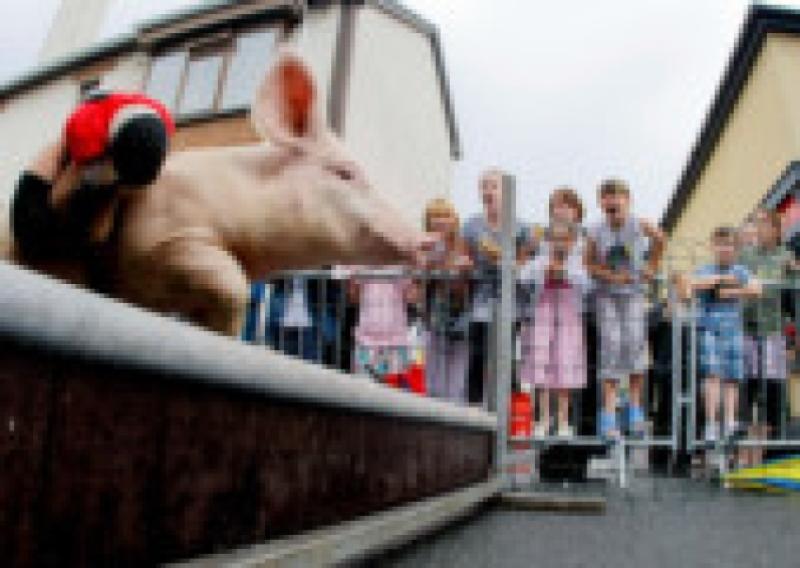 Pigs will fly through the streets of Tullamore on Saturday August 10th on the eve of the town’s Annual Show.

Pigs will fly through the streets of Tullamore on Saturday August 10th on the eve of the town’s Annual Show.

The streets around Hugh Lynch’s Bar will be thronged when the novelty Pig Racing event, which is approved by animal cruelty organisations, will bring traffic to a halt.

Six pigs along with their own miniature knitted jockeys will take part in each of the six races and will gallop down a purpose built 60 metre track complete with small jumps while bookies will be on hand to take spectator bets before each race.

All proceeds from the event go towards the staging of the inaugural Harvest Offaly Food Festival which takes place in Tullamore over the weekend of September 13th to 15th.

The organisers of HOFF have a packed programme of events lined up including an opening street parade, artisan food stalls, craft markets, a long table banquet and cookery demonstrations from some of Ireland’s top chefs and foodies.

The HOFF programme will be centred around both O’Connor Square and Tullamore’s Canal Quarter. A long table banquet which will showcase local food, drink and delicacies is the planned highlight of the weekend while a themed cocktail event at the newly refurbished Tullamore D.E.W.  Visitors Centre will get the weekend off to a glamorous start on the Friday evening.

The highly acclaimed Michelin star chef JP McMahon from Galway’s award winning Aniar Restaurant will give a master class on the fine arts of cooking and he will also be joined by Padraig Og Gallagher (Boxty House), Nessa Robbins, Kenmare Foodies, Fergal O’Donnell (The Fatted Calf) and many others

An Artisan food market with exhibitors from Offaly and the rest of the country will be held in O’Connor Square on the Saturday and Sunday while there is also a range of events and food demonstrations for children to enjoy while cultural attractions such as music, dancing heritage and outdoor activities will also be part of the Harvest Offaly Food Festival.

More information of HOFF is available on Twitter by following @HOFF_Offaly and on Harvest Offaly Food Festival, The HOFF on Facebook.