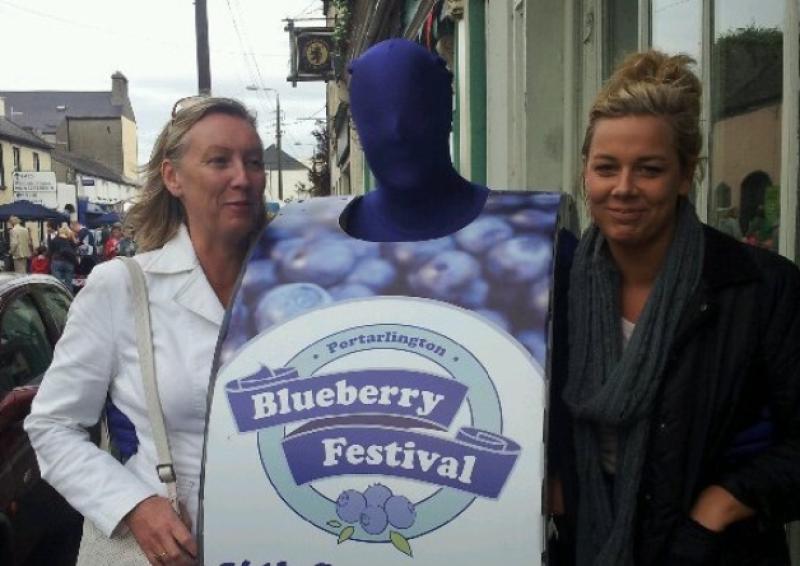 This year’s Portarlington Blueberry Festival is all about records with a number of attempts to get into the Guinness Book of Records are planned over the weekend of September 20 to September 22.

This year’s Portarlington Blueberry Festival is all about records with a number of attempts to get into the Guinness Book of Records are planned over the weekend of September 20 to September 22.

The “little blue dynamos” are the second most popular fruit in the USA where they are regarded as a ‘super food’ because they are high in fibre, low in sugar and they are also packed with health-enhancing phytochemicals.

But, enough of the science. The weekend will be an opportunity to showcase the abundance of natural goodies available locally from blueberries to mushrooms, to potatoes, yogurt, honey, cheese, jam and butter.

The Blueberry Harvest Festival will commence with a Thanksgiving Ecumenical Service at St Michael’s Church on Patrick Street at 7.30pm on Friday September 20.

There will also be live music around the town all over the weekend.

Saturday is the day of the Big Push at Portarlington Rugby Club when an attempt will be made to create the biggest scrum in the world and to get into the Guinness Book of Records.

The current record is 800, which Port RFC will be hoping to beat, so why not go along to help put the town in the record books? Go along and register and get a free T shirt too.

It will also be a free Family Fun day with bouncing castles as well as old fashioned games for young children and teenagers.

There will be plenty of sporting activities too and more world record attempts including two rugby matches and an exhibition to promote girls rugby.

Efforts will also be made to create a Port Book of Records.

There will also be Bush Tucker Trials, World Bowley Championships (roll the rim of a bicycle wheel) along with a Magician Show, and the local Drama Society will perform a comedy sketch. There will be plenty of live music and lots, lots more!!!

The Vintage Threshing Fair will take place on Sunday September 22 from 2pm - 6pm at Barrow Bridge with an old fashioned Threshing machine in full operation. There will also be an Old Fashioned Mobile Kitchen serving traditional dishes of the time, bacon and cabbage, potato cakes etc. Two major competitions take place on Sunday - the search for the Largest Head of Cabbage in the midlands and the Blueberry Bake Off which is expected to attract eager bakers of all ages from all over the country. Cake tasters are required if you are feeling hungry.

Representatives from Derryvilla Blueberry farm will also be in attendance displaying the fantastic range of goods they make from the blueberries.

St Paul’s French Church will be open on the Sunday from 1:30 to 4pm for tours, viewing the church and light refreshments.

Other entertainment will include Vintage Cars and Vintage Farm machinery along the bridge with food and Fair Stalls along the River Walk and live music throughout the town centre.

It promises to be a great weekend!!