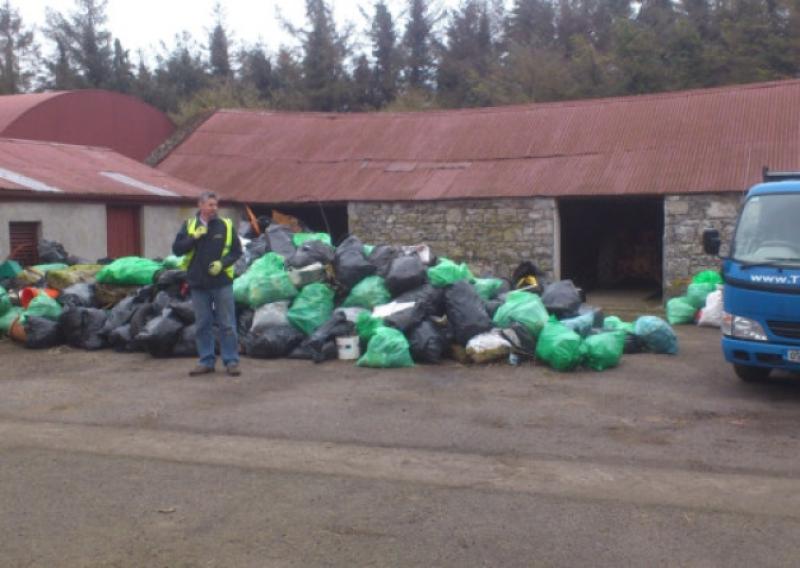 OVER 250 people took to the streets of Portarlington last weekend and cleaned up a whopping 500 bags of rubbish as part of the Tidy Towns Spring Clean.

OVER 250 people took to the streets of Portarlington last weekend and cleaned up a whopping 500 bags of rubbish as part of the Tidy Towns Spring Clean.

However, Tidy Towns member David Maher told the Leinster Express that approximately 90% of the rubbish found was not litter, but illegally dumped. “At the moment we are definitely winning the battle on litter and losing the war on illegal dumping,” he said.

The number of bags collected is lower than last year when 700 bags were found covering a smaller area in the town. The good news for Port is that the problem is some way smaller than last year but the town is facing a “war” against illegal dumping.

“We had the same number of volunteers as last year and collected less bags but only 10% of these were litter. 90% was illegally dumped. This is a lifestyle choice that people are making by deciding not to go to pay for their dumping”.

David said that there are a number of solutions to this and suggested extending the national register for the household tax to include a register for people disposing of their rubbish.

“Everybody then would have to be responsible for disposing of their rubbish and they would have to account for where their rubbish is going. The second thing is to make all recycling centres free. It was a huge mistake to charge people into the centres. At the moment recycling is profit based and we have to encourage people to use the system”.

He also suggested forcing all landlords to include refuse collections in their rent, stating that a lot of illegal dumping comes from rented houses.

“It would be very effective if these were done. I would like to see investment in Portarlington. There could be a huge tourist and local food industry in Laois and Offaly, but nobody wants to take holidays if the place is dirty”.

David added that the people of Port are doing all they can do stating that, “leadership needs to come from the Government”.

He said that in some housing estates over 50% of households were out at the weekend helping with the clean up, and flyers weren’t distributed to others as they were already so clean.

“To get the number of people out that we did at the weekend shows how much people care. For one day Portarlington is the cleanest town in Ireland”. Flyers, gloves and sacks were distributed to people all over the town for the clean up which took place last Saturday, and there were trucks to take the rubbish away.