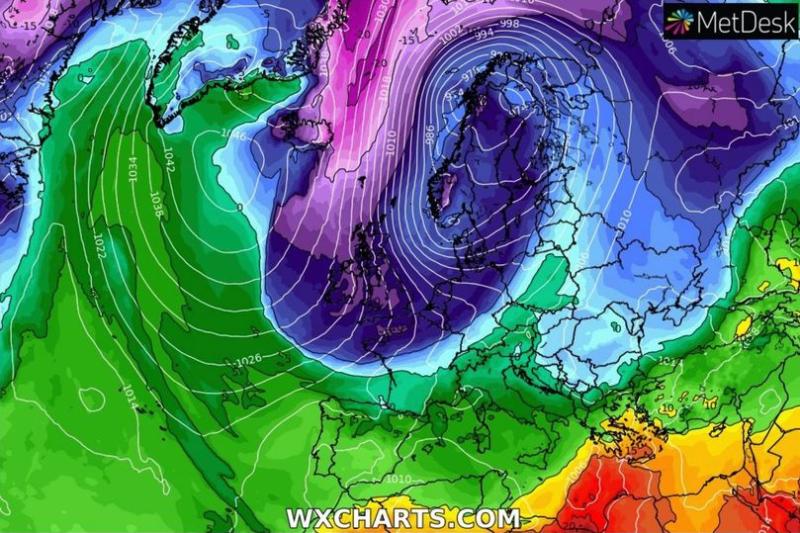 While temperatures today are approaching a very respectable 20 degrees, it looks like the weather is going to get much colder again after the Easter weekend.

According to Weather Alerts Ireland, models are still forecasting that very cold Polar Air will push down over Ireland early next week. The forecaster adds that it is still a week away stating that it will be interesting to see how it progresses during the week. See more below.

In its forecast for the days ahead, Met Eireann says that on Easter Sunday and Bank Holiday Monday says that rain followed by widespread showers will push down from the north for Sunday and Monday, turning wintry at times. Becoming breezy and turning cooler as a strengthening northerly airflow sets in with widespread frosts at night.

READ THE FULL FORECAST BELOW

MET EIREANN FORECAST FOR THE WEEK

Overall cloudy on Wednesday with scattered outbreaks of rain and drizzle, mainly affecting Atlantic counties. Cooler than recent days in these areas with highest temperatures ranging 9 to 12 degrees Celsius. Holding largely dry over much of Leinster and southeast Munster with some mild spells of sunshine breaking through; coastal fog persisting for a time early on though. Again milder in these parts with highest temperatures of 13 to 16 degrees Celsius. Winds will be just light variable mainly northerly countrywide.

Wednesday night: Cloudy to begin but becoming dry for much of the country overnight with just occasional patchy rain and drizzle affecting northern and southern coastal counties. Lowest temperatures of 2 to 5 degrees with clear spells developing. Some mist patches will develop in light to moderate northeasterly breezes.

Thursday: Largely dry with good sunshine, however, some cloud will push in from the Irish Sea with perhaps some drizzle feeding into eastern and northeastern coastal areas. Highest temperatures of 14 to 18 degrees, a little cooler in the east and northeast, in light to moderate east to northeast breezes.

Thursday night: A dry and cold night with good clear spells. Mist patches will develop in light to moderate northeasterly breezes. Lowest temperatures ranging from 0 degrees in the north with frost developing, to 6 or 7 degrees in the south.

Friday: A dry day with good sunshine. Highest temperatures of 9 to 13 degrees in light northeasterly breezes.

Friday night: Continuing largely dry but a cooler night than recent with lowest temperatures of -1 to +3 degrees. Mist and fog will develop in light breezes and mostly clear skies.

Saturday: A largely dry day but cloud will build from the north during the morning and afternoon but staying rather sunny in the south for much of the day. Highest temperatures of 8 to 11 degrees in light variable breezes becoming mainly westerly later.

Saturday night. Largely dry to start but rain will push down from the north towards dawn as mainly light to moderate westerly winds strengthen along northern coasts. Lowest temperatures of 1 to 5 degrees.