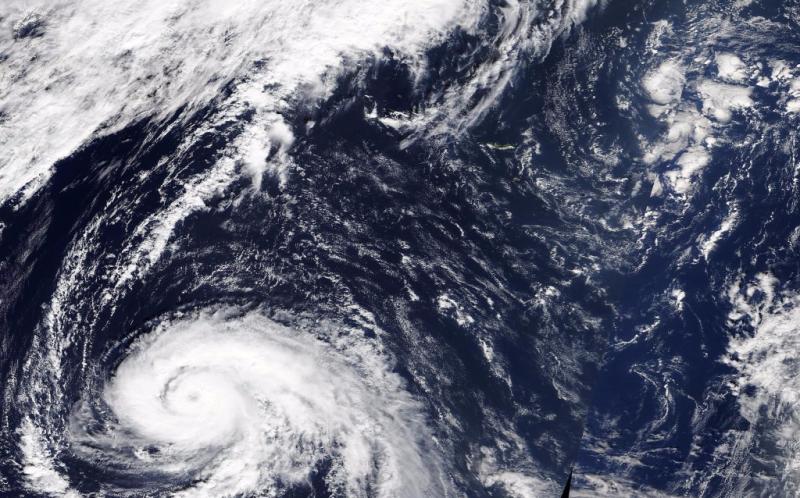 An image of Hurricane Ophelia which hit Ireland in 2017

We speak in reverence of what we cannot see, bowing to this spectres force, that whispers on each breeze within the consciousness of our mind. In our past, and in our present, and almost certainly in our future.

Each breath from our very vernacular, a breezy day, a bit blustery, she’d skin ye, she’d fleece ye, biting, sniping, a full gale, strong gale, wailing, flailing, blowy, gusty, a constant in our fleeting world. It’s as little wonder that we find ourselves tossed about by the forces of nature, a mere emerald outcrop of shredded rock, worn and torn by the lashing winds and crashing waves of the North Atlantic.

Shaped by the comings and goings, the swells and farewells, casting our eyes always westwards, towards the setting sun, red skies in the mornings, and severe gale warnings. Our westerly tempest, our storm, our maelstrom, the shaper of lands, the master of the seas, and now more than ever, thundering relentlessly onto the unloving rocky prisms of the Wild Atlantic coast of Ireland.

In the worsts of W.B. Yeats, “All changed, changed utterly; a terrible beauty is born." Winter storms are just a part and parcel of the bargain of living on such an exposed piece of land, jutting out into the rolling waves of the North Atlantic Ocean, and we’ve certainly had more than our fair share of exceptional storms during the past twelve months. Starting with Hurricane Ophelia, which cut a swathe of destruction across the country that cost the Irish economy some €1.5 billion in losses associated with the closure of business and industry for the duration of the tempest, our weather has been nothing short of exceptional over the course of the past calendar year.

Once Ophelia passed we were then subjected to the icy throws of storm Emma, Ireland’s worst blizzard since 1982. Emma would dump over 100 cm of fresh snow across the barren slopes of the Wicklow mountains, blanketing the Midlands in a layer of powder fresh snow which winds in excess of 80km/h would sculpt into icy works of art along each sideway and byway across the land.

Any remaining thoughts of winter were soon melted away by the oppressive heat of June and July that turned the emerald land of ours into a sickly hue of amber, scorching over 800 acres of forestry, and leaving Ireland suffering its worst drought since 1995. One would be forgiven for thinking that our weather had gone haywire, and indeed it certainly appeared that way with the onset of our winter storms, as Ali left over 250,000 customers without electricity, killing two people and forcing
the cancellation of a day of the national ploughing championships for the first time ithe event's historyry.

But what’s driving such extreme conditions? Are these conditions abnormal? Indeed, are conditions deteriorating almost annually? Let’s try to answer some of those questions now. If we break down a sequence of these past events one of the first striking similarities that we find is that in all cases the jet stream has been bent and contorted, weakening as it does so until it
detaches, causing a reversal in many cases of the typical west to east flow of winds across the Atlantic.

The research of Jennifer Francis, a leading US atmospheric scientist believes that the increased warming of Artic regions, as opposed to areas further south across the subtropical Atlantic has caused a weakening in the temperature gradient which powers the jet stream in a west to east direction, resulting in an increase in the longevity of weather patterns, and increasing frequencies of abnormal weather conditions.

Imagine riding a bicycle for a moment; once you have speed you tend to move in a more direct manner, however if you slow that bike down considerable you eventually reach a point whereby its simply not possible to maintain your forward momentum and you begin to wobble and meander in order to maintain the bikes forward motion, and of course to avoid a bruised knee!

The jet stream behaves much like our bicycle, the faster it travels the easier the more direct it becomes, but when the jet stream is slow it meanders and wobbles considerably. This meandering leads to much more extreme weather phenomena right across the northern hemisphere, with an increase in heatwaves, snowstorms, flash floods, European hurricanes, droughts and wildfires, all of which have afflicted Ireland and much of Europe over the course of the past twelve months.

Assessing whether our weather has become extreme over the course of the past decade or so is much more difficult to quantify, as very often it can become a subjective argument depending upon the memory of the individuals in question. However, what we can say is that extreme weather has happened before in the past and has been more extreme in some cases. For example, its often reputed that the worst storm ever to strike Ireland occurred in January 1839 and became known as “the night of the big wind”.

The storm left a trail of devastation across the country with accounts from the time estimating that no building in the country was left unscathed, with over 300 killed directly by the effects of the storm, and with thousands of acres of forestry uprooted the storm is considered by many to have been the worst in a thousand years of Irish history.

What is noticeable however is that the frequency of such extreme winter storms seems to be increasing, and considerably at that. Extreme Atlantic storms such as Darwin which brought winds of 160km/h to parts of the country in 2014, indeed 2014 was exceptional in the period immediately prior to and after Christmas during which time over six Atlantic storms caused over 50 million euros worth of damage to Atlantic coastal counties.

Hurricane Ophelia, which devastated parts of Munster with winds of more than 156km/h, became the first Atlantic hurricane since Charley and Debbie to strike the Irish coast, which was quickly followed this year by hurricane Florence which passed just to the southeast of Ireland, and hurricane Leslie which set a new windspeed record of 176 km/h for Portugal earlier this month. Storm Ali as previously mentioned developed rapidly as it approached Ireland, resulting in two deaths in Galway and Down, with winds of 146km/h recorded at Mace Head, Co. Galway.

Now more than ever we are faced with an increasing frequency of severe natural disasters as part of a changing climate. The rather damning report on the current state of our climate, issued little over a week ago by the IPCC, shows that to prevent our temperature from passing the two-degree Celsius barrier, we must eliminate our carbon emissions by the year 2050. Considering that global emissions are continuing to rise, the situation would appear rather bleak in terms of reaching a point where we can realistically expect to begin reducing our emissions.

Also contained in the report was the rather stark warning that certain tipping points exist within the earth’s natural systems which if activated we may find ourselves in an increasingly dangerous and volatile world climate. If we consider the changes already at play due to little more than a warming of 0.8 degrees Celsius, one can only begin to imagine the potential affects that a further warming of 1.2 degrees Celsius may have on the climate of Ireland. Numerous projections already indicate that winter precipitation is expected to increase considerably, while droughts are set become increasingly common across the southeast of the country.

Perhaps most alarmingly from an Irish perspective is the number and intensity of east Atlantic hurricanes looks set to increase considerably, owing to the warmer sea surface temperatures in the sub-tropical Atlantic, clashing with cooler than average temperatures in the sub-polar Atlantic, thereby causing more extreme wind storm events, such as hurricane Ophelia, Leslie, and storms Ali, Callum and Emma.

In the words of the American writer William Arthur Ward, “the pessimist complains about the wind, the optimist expects it to change, the realist adjusts the sails”. Perhaps we would all do well to readjust our sails in the face of the coming gales that howl around our island in sea of perpetual change.