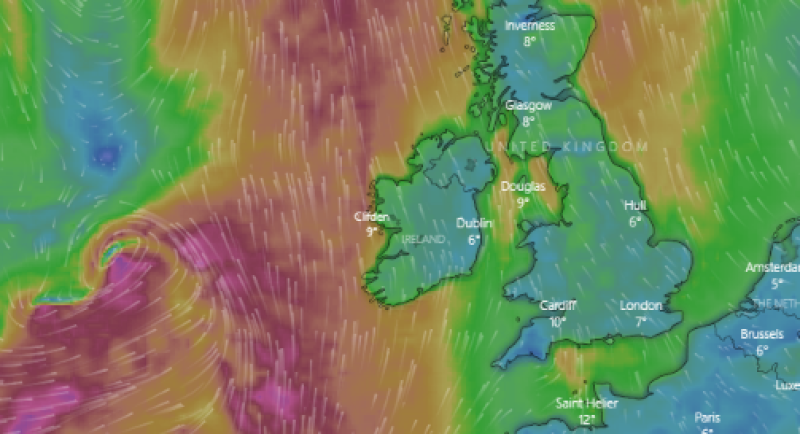 Met Éireann expects unsettled and potentially damaging weather to arrive in Ireland on Friday with showers and spells of heavy rain lingering into the weekend.

The national forecaster has issued a series of warnings covering most of the country on Friday with Offaly included in a wind warning specific to Leinster, Cavan, Monaghan and Donegal.

"Southeasterly winds will reach mean speeds of 50 to 65km/h with gusts of 90 to 110km/hr. Gusts will exceed these values in exposed coastal areas and on higher ground, especially in the southeast," Met Éireann warns.

This warning was issued on Thursday and is valid from 8am on Friday morning until 7pm on Friday evening.

Munster and Connacht are included in a separate similar warning which warns of similar conditions. This warning is valid until 3pm on Friday.

Met Éireann warns that heavy rain will lead to accumulations of around 25 to 40mm but may exceed these limits in mountainous areas in these counties.

This warning is valid from 6am on Friday until 6pm on Friday evening. Standing water will remain an issue for motorists beyond the warning.

On Saturday, Met Éireann expects a mix of sunny spells and showers. Many of the showers will be confined to more western parts of the country with a good deal of dry weather in the east. However, some of the showers in the west will be heavy with the risk of hail and thunder. Maximum temperatures 8 to 11 degrees. Scattered showers will continue on Saturday night with lows of 2 to 6 degrees.

Further sunny spells and scattered showers are likely on Sunday, the showers most frequent in the western half of the country with a slight risk of hail and thunder.

Later in the day, the showers may give way to longer spells of rain in the west. Southerly winds will freshen a little during the afternoon. Maximum temperatures of 9 to 12 degrees.

Looking to next week, Met Éireann predicts sunshine and showers on Monday with temperatures close to normal or slightly above. A good deal of dry weather Tuesday but rain will spread from the west later Tuesday night.