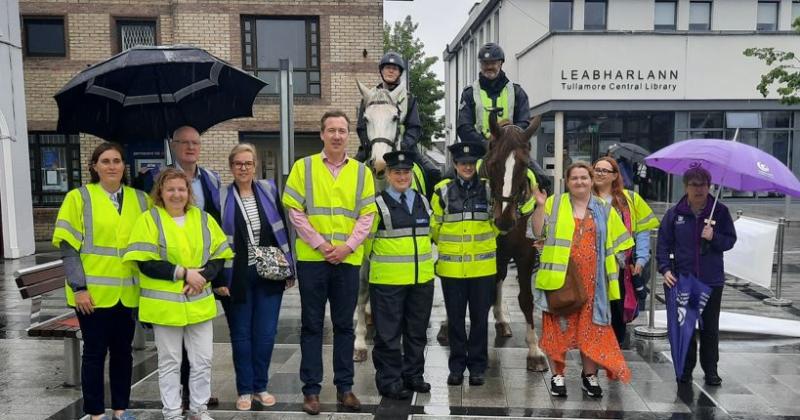 MEMBERS of the public were asked to share their views on improving safety from risk of gender based harassment and violence in public amenities such as parks, playgrounds and greenways in a survey conducted in Tullamore this week.

Different recommendations and some common themes were given by people of all genders and ages when the survey was conducted in Tullamore town centre on Friday last, designated as “Offaly Safe Day”.

Cllr Neil Feighery, Cathaoirleach of Tullamore District Council, said the public's views would make for a very interesting report which will be presented to the September meeting of the Offaly Joint Policing Committee.

He said there was a “huge level of engagement” from members of the public who took part in the survey.

Cllr Feighery made his comments when addressing volunteers from a number of local groups and members of the gardai who took part in the walkabout on Friday.

The survey, which was also conducted in Birr and Edenderry, is part of the work of a new subgroup of Offaly Joint Policing Committee looking at gender based violence and harassment in public amenities in the county.

In a separate address at the start of the walkabout, Cllr Feighery, who did not directly mention the murder of Ashling Murphy, said the new subgroup had been established in the wake of the horrific events which took place in Tullamore earlier this year.

“We want to see how we can make public areas safer for people of all genders and ages,” stressed the Fine Gael public representative.

Also present at the conclusion of the survey were members of the mounted division of An Garda Siochana.

Cllr Feighery led the town walkabout where volunteers took note of people’s perceptions on the scale of the problem of gender harassment and violence. Junior Minister Pippa Hackett and Cllr Tony McCormack also took part in the walkabout.

The survey captured local issues of relevance which may be contributing to a feeling of or the reality of being unsafe from gender based harassment.

The walkabout looked at site specific issues such as proximity to entry and exits points along walkways, the importance of clear lines of vision, and placement of public lighting.

In a statement released prior to “Offaly Safe Day”, the Chair of the subgroup, Cllr Mark Hackett said “research suggests that some groups experience higher rates of gender based violence and harassment and we want that experience reflected in our findings so we can make recommendations to improve it. ”

Inspector Oliver Baker said “keeping people safe is the mission of An Garda Siochana.   Listening to the ever evolving needs and demands of our community is critical to ensuring an effective and efficient policing service is delivered.   Understanding the needs of our community will result in sustainable solutions to community safety concerns.”

The recommendations, planned to be ready later this year, will be presented to An Garda Síochána and Offaly County Council to be considered when planning future public space service delivery and design.