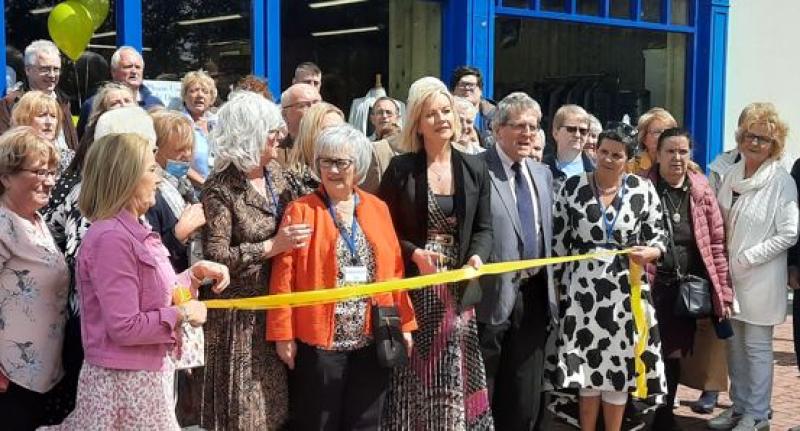 RTE star Claire Byrne was mobbed by fans when she travelled to Tullamore this afternoon, Friday, May 20, to officially open the new Offaly Hospice charity shop.

The Mountrath born radio and television presenter is a patron of Offaly Hospice and a strong supporter of the campaign to build a dedicated hospice for the Midlands region in Tullamore.

Professor Humphrey O'Connor, chairman of Offaly Hospice, extended a warm welcome to Claire and said she had made a special effort to be in Tullamore for the day.

He explained that her own experiences of hospice care and made her very aware of the need for a dedicated hospice in the four Midland counties of Laois, Offaly, Longford and Westmeath.

Professor O'Connor also thanked the volunteers who had pulled out all the stops to ensure the shop was fully fitted out for Friday's official opening.

The outlet is located on Main St, opposite Lidl, in a large, spacious building previously occupied by Kentucky Fried Chicken.

Supporters of Offaly Hospice from throughout the county were in attendance, including Lusmagh's Edward Delahunt who is very involved in the Hooves4Hospice campaign.

Also present was the Principal of Tullamore College, Edward McEvoy and students and staff members who recently took part in the coast to coast tandem cycle fundraiser for Offaly Hospice.

Members of some of the other four hospices in the region were also in attendance.

Veronica Larkin from North Westmeath Hospice said her group were working hard to support the planned new regional hospice and will form part of a new executive which will oversee the project.

Architect's plans and models for the ambitious project - to be located on a site near Tullamore hospital – were also on display.