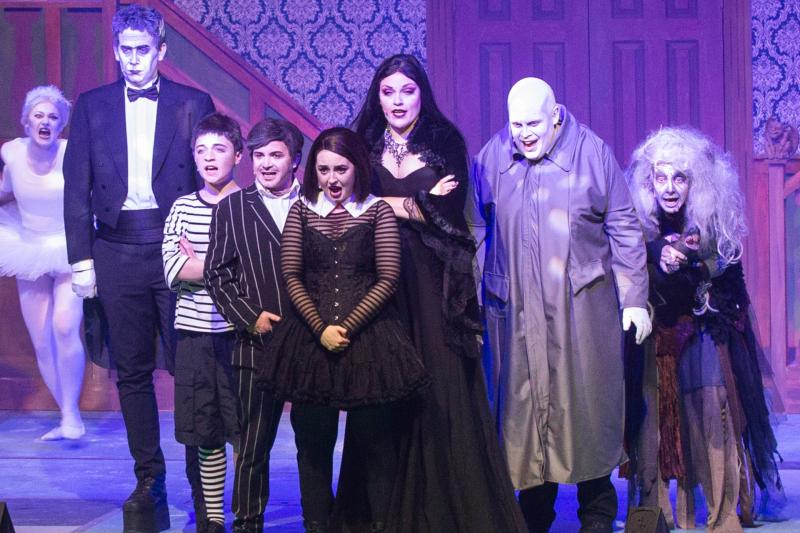 The stars of Tullamore Musical Society's 'The Addams Family'

MORBID and macabre goings-on in New York's Central Park frame the storyline to the 2022 offering from Tullamore Musical Society “The Addams Family”.

Making a welcome return after a two-year enforced absence due to Covid, the cast of “The Addams Family” pulled out all the stops in a brilliant opening night performance on Monday last.

“The Addams Family” is a mammoth show to stage but the cast and behind the scenes team at TMS ensured everything ran very smoothly on the opening night.

The long hours of preparation and commitment from all the TMS team paid off huge dividends with Monday night's sell-out audience being wowed by a very professionally staged production.

Director Pat McElwain, choreographer Deirdre Browne and musical director Enda O'Connor are to be congratulated on a stupendous production.

The plot centres on the somewhat sinister Addams family, descendants of a Spanish family who settled hundreds of years ago on a site in what is now New York's famous Central Park.

Appropriately the opening scene is set in a graveyard where the family – Gomez, Morticia, Fester, Grandma, Wednesday, Pugsley and Lurch – have gathered for their yearly ritual celebrating life, connecting with their past and ensuring their future.

The family are joined by their dead ancestors and the cast all joining together in two toe tapping airs – the Addams theme and “When You're An Addams”.

Soon the audience are made aware of the central part of the storyline – young Wednesday, daughter of Gomez and Morticia and sister of Puglsey has found love.

But the love of her life, Lucas Beineke is from a completely different background to the Addams, hailing from Ohio.

Attendees were treated to some hilarious antics when Lucas' parents, Mal and Alice attend a family dinner where all participants take part in the traditional “Full Disclosure” game.

Not a game for the faint-hearted chaos enfolds when Wednesday announces she is to marry Lucas. Meanwhile the audience are treated to the revelation of some family secrets and we discover that the two families have much more in common that appears at first.

A major storm is still raging at the commencement of the second act as the plot reaches its high point with everything changed for the two families.

Despite the sinister goings-on “The Addams Family” is essentially a comedy and had the audience, in particular the young members, in fits of laughter for much of proceedings on Monday night.

The musical numbers, including “Wednesday's Growing Up”, “One Normal Night”, “Secrets”, “Just Around the Corner”, “Tango de Amor” and the stirring finale “Move Towards the Darkness”, were received enthusiastically by the capacity audience in the GAA Centre.

As we have come to expect in the Musical Society's 67 years the stage set and costumes were of an extremely high standard and tribute must be paid to all the behind the scenes team for their professionalism.

The ensemble cast was also highly professional while the orchestra rounded off a highly enjoyable production.

“The Addams Family” will be performed each night at 8pm until next Saturday, May 7 in Tullamore GAA Centre.