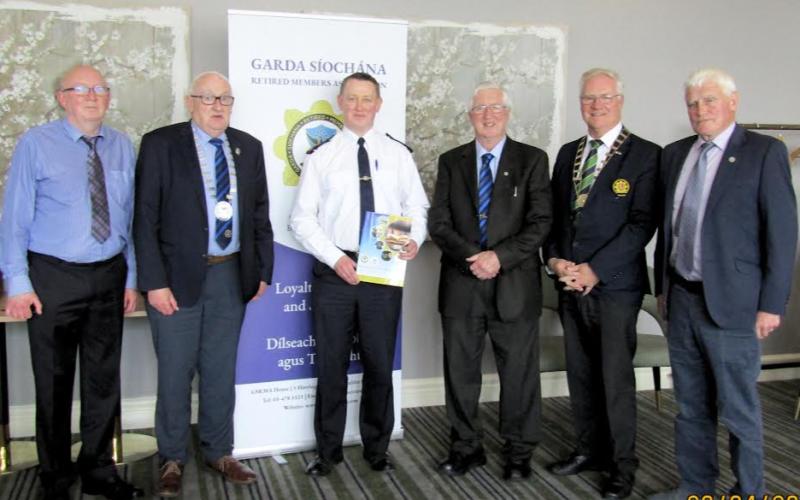 IN the 1930s the garda commissioner General Owen O'Duffy decided that bicycles were travelling too fast and cars were definitely going too fast. He introduced the ''stopwatch'' speed detection system.

This involved three gardai who would pick out a straight stretch of road where vehicles might be inclined to speed. The gardai would mark out a 100 yards area of road. Garda A would stand at the beginning of the stretch while Garda B would stand at the end with the stopwatch. When the unsuspecting vehicle passed Garda A would put up his hand and Garda B would start the stopwatch. When the vehicle passed him he would stop the watch. He then consulted a chart which informed him what speed the reading on the stopwatch represented. Garda C who was in the bushes would then step out and stop the car.

This is just one of the many stories in 'Duties Long Forgotten' a book by retired Sergeant Michael Dalton and which was compiled by the Offaly Branch of the Garda Siochana Retired Members Association.

The launch took place last Wednesday in the Tullamore Court Hotel by Supt Eamon Curley of Roscommon where Michael Dalton hails from.

Recalling the above stopwatch story, Michael Dalton said he had become curious when he came across the stopwatch in a box which arrived from Daingean Garda Station. He said there were three garda names etched on the back of the watch and it piqued his interest. He remarked that the aim of the commissioner was to rid the roads of all the road hogs.

Another story he told at the launch was that of finding what he thought was a gramophone when the old garda station in Tullamore was being demolished. He later discovered it was a lingua-phone.

''A skip arrived, but I thought that it was too nice to be entering a skip along with 25 records. I learned after that it was used in stations in 1929. The commissioner would issue a lingua-phone to each station to assist in teaching Irish to the guards. In a year and a half everyone would be a fluent Irish speaker. I'm afraid he was a bit optimistic,'' said Michael.

One day Michael found a box containing small bottles. Having made enquiries he found out that Garda John Canon used them. Garda Canon told him. ''When milk came into town my job was to go out and examine it and I had a lactometer which told me how much water was in the milk. One man was known as watery Joe as the milk was a little bit diluted.''

The book gives an indication of how difficult it was to be a guard at the time for gardai.

''There wasn't huge crime but there was some, people were shot and there were guards shot, but by and large the country was fairly law abiding. If you had two fellows coming home from a pub and they fell over it was the guards job to bring them home,'' said Michael.

The living conditions were ''horrendous'' for the gardai, Michael recalled. He remembered that one particular garda station he was sent to had no toilet but a small shed-like structure at the bottom of the garden which was covered in briars and bushes. ''But you did your best after that,'' he said.

He thanked Peter Kelly for his help with the book. ''I couldn't have managed without Peter. I am not a whiz kid on computers but Peter is, so if we wanted any problems solved Peter did it. By and large everyone in the branch helped and anyone I asked did the best they could,'' he added.

He continued ''I want my younger colleagues to read this book and to be aware of the history of the organisation and the great things that have been achieved,'' he added.

He said one aspect he particularly enjoyed coming from a farming background was the clean sheep wool act of 1974. This was where the gardai had to inspect the wool to see if it contained raddle or dirt and if it did they had to report it to the commissioner. ''I'd be curious to know if the commissioner would know what raddle is now?'' he said.

In conclusion he said, ''it's a great book about the history of the organisation and the roles we did in the past which wouldn't be understood by members in the future without writing it down and putting it in words and pictures. It's a credit to yourselves,'' he said.