“Once that site is cleared we'll all get a better sense of the potential that is there.” 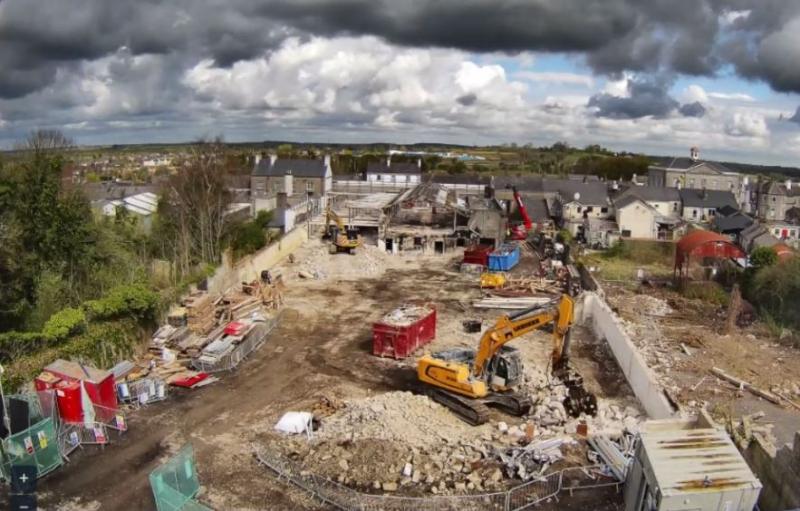 Demolition work at the former Tesco site in Edenderry

Demolition and clearance work at the former Tesco site in Edenderry town centre is continuing.

A new library and arts centre will be built off JKL Street in the first phase of a major redevelopment project across 33 acres.

“The back building is now totally gone. There was a three or four-storey mass concrete grain store there,” Offaly County Council engineer Mark Mahon told members of the Edenderry Municipal District at their April meeting.

The site at the street was originally occupied by M.P. Obrien's merchants and later by Quinnsworth and Tesco before the latter opened a new supermarket elsewhere in the town.

Following years of dereliction a master plan was drawn up for the entire site and the first step in the long-term project is the demolition of existing buildings.

In a detailed update, Mr Mahon said roof sheeting was now gone, asbestos had been removed and the building closer to JKL Street will next be demolished, with supporting work to be carried out on an existing archway.

“Once that site is cleared we'll all get a better sense of the potential that is there,” said the engineer.

Sharon Kennedy, the council's Edenderry district manager, said she would like to see an “interactive” structure in place on the street for the duration of the construction work.

An idea for a projector and large television screen was deemed unworkable, said Ms Kennedy, but she hoped that instead of a hoarding, a display which can “change from time to time to reflect activities happening in the town” can be put in place, perhaps in consultation with schools and Creative Edenderry.

Ms Kennedy also said progress is being made on the appointment of a design team for the library and arts space.

“The tender process is at the second stage now and we should have results on that in the next month,” she said.

“The Tesco site looks fantastic when you see it looking back in from the back of the building. It looks huge,” said Cllr Quinn.

The entire site stretches back as far as Blundell Park and the castle ruins.

A new street will run through the entire site and the location of Edenderry's proposed primary care centre there has also been suggested.