"Sometimes the most beautiful thing is the aroma." 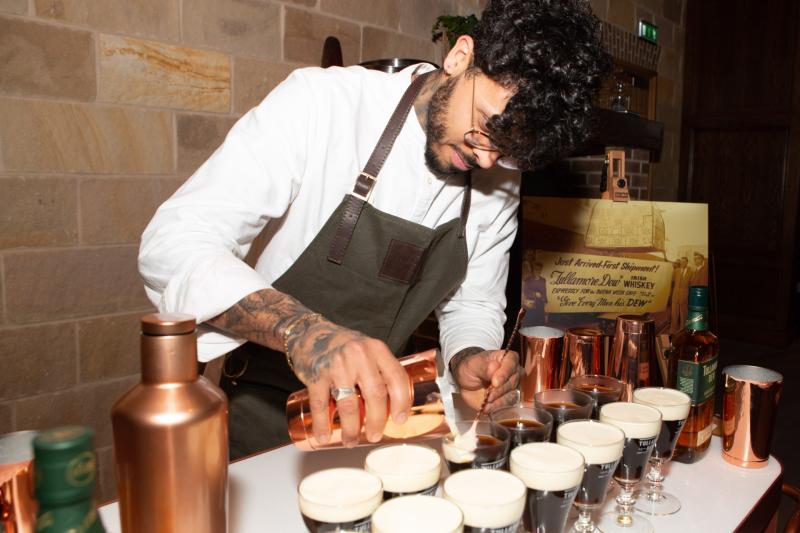 TULLAMORE DEW has opened its new visitor experience at the whiskey distillery on the bypass outside the town.

The tourist attraction launch follows the closure of the visitor centre in the former bonded warehouse at Bury Quay on the Grand Canal in the town in September 2020.

The Bury Quay premises housed a restaurant, store and interpretive tour but its replacement at the distillery focusses on the whiskey experience only, along with a shop for Tullamore DEW branded purchases.

Tickets for the tour are €35 and for that, groups of up to eight or 10 will be taken on a 105-minute trip around the distillery, its stills and a warehouse, concluding with a guided tasting and an opportunity to blend your own bottle of whiskey – for an extra €75.

Tullamore DEW opened the distillery in 2014 and as he brought visitors around the site on Monday evening, ambassador Kevin Pigott said that a total of €110m had been invested across the 57-acre site in Clonminch and Ballard by company owners William Grant so far.

That investment is set to continue. “We're not afraid to invest. It makes sense for the long-term, for the legacy of the brand,” said Mr Pigott.

Initially €35m was spent on the main distillery building, which houses six stills, but after that a bottling hall was added at a cost of €24m and further investment in grain facilities, warehouses and cooperage followed.

Tullamore DEW uses barley and wheat for its whiskey, including malting barley supplied by 24 Offaly farmers.

Because its Tullamore plant now covers the full spectrum of production from distilling to maturation to bottling, the company's boast is that Tullamore DEW is truly “grain to glass”.

It previously used a bottling plant in Clonmel and savings on transport costs, plus the use of heat recovery systems during production, rainwater harvesting and the planting of trees on the site, contribute to its efforts to improve sustainability, Mr Pigott outlined.

Visitors first see a large metal depiction of the phoenix, the symbol of Tullamore, and Mr Pigott says it also represents the renaissance of Irish whiskey.

Tourists get their first taste of the produce in freshly made Irish coffees and are taken through the history of the popular beverage, which had its roots in the Buena Vista bar in San Francisco.

The next step is a walk across the still house floor and its famous copper stills, the experience of the odour from the fermentation process, plus a look at the spirit when it is a clear colour, long before the ageing process in the barrels gives the whiskey its darker hue.

Explaining why the new visitor attraction now has just one pricing option, €35, Mr Pigott said: “We wanted to streamline it, everyone's a VIP, treat them all the same.”

He added: “I decided we wouldn't do short tours. We would do long tours, immersive. People trek to come here, people make an effort... We have to play to the strengths of what we have.”

Customers get to experience the smell of different whiskies up close with special “nosing glasses” which have a built-in balloon which when squeezed, pushes the aroma into the nasal passage.

Mr Pigott found the nosing devices in Germany. “I wanted to understand from a sensory perspective what you can do with whiskey when you just nose it and you're not overwhelmed by the intensity of alcohol. Sometimes the most beautiful thing is the aroma.”

After nosing the scent the visitors are taken on a brief bus journey past the bottling hall, where the bottles can be seen through large windows as they move along the the production line, and on to one of the site's 10 warehouses.

Billed as one of the “most breathtaking parts of the tour”, the visit to the maturation warehouse involves a pause (on Monday guests were entertained by singer and guitarist Marcus O'Leary) at a purpose-built snug tucked in among tens of thousands of barrels stacked from floor to ceiling.

From their seats in the snug, surrounded by the tools of the coopers' trade, the tourists are offered a thimble of potstill whiskey straight from a wooden cask, known as “dipping the dog”.

Fifty-thousand whiskey casks hold 10 million litres of whiskey and one bottle is 700mls.

For the tasting back in the main distillery building, the whiskies selected were Tullamore DEW original, still by far the biggest selling in the company's portfolio, the 12-year-old special reserve and Tullamore DEW XO, which is matured in rum casks.

The 'Be the Blender' section at the conclusion of the tour offers the chance to blend and bottle a unique personalised whiskey from many different options on a touch-screen.

Cathy Sullivan, marketing manager, Tullamore DEW distillery, said the new experience is a “real tour” which is different from the competition.

“It's very, very unique. I can't think of anybody else who is taking people through an authentic Irish whiskey distillery experience where you get to go through distillation, maturation, you can see the bottling, and you get to have the tasting and sampling and then blend your own whiskey.”

The Tullamore distillery is the newest in the William Grant & Sons group, a largely Scottish-based whiskey business.

While the visitor centre on Bury Quay attracted about 40,000 people annually at peak, the target for the new development is lower, perhaps 14,000, and it is open to the public from Tuesday to Sunday, with Mondays reserved for industry and corporate tours.

Among those on the final tour on Monday evening were Grainne Cornally, who promotes the Failte Ireland Hidden Heartlands brand, Barbara Smyth, Silverline Cruisers, Lauren Burns, Birr, Gillian Murphy, Offaly Enchanting Tours and Christina Byrne, owner of Ardmore Country House, Kinnitty, who proudly declared that her guests are offered a drop of whiskey mixed in their morning porridge.