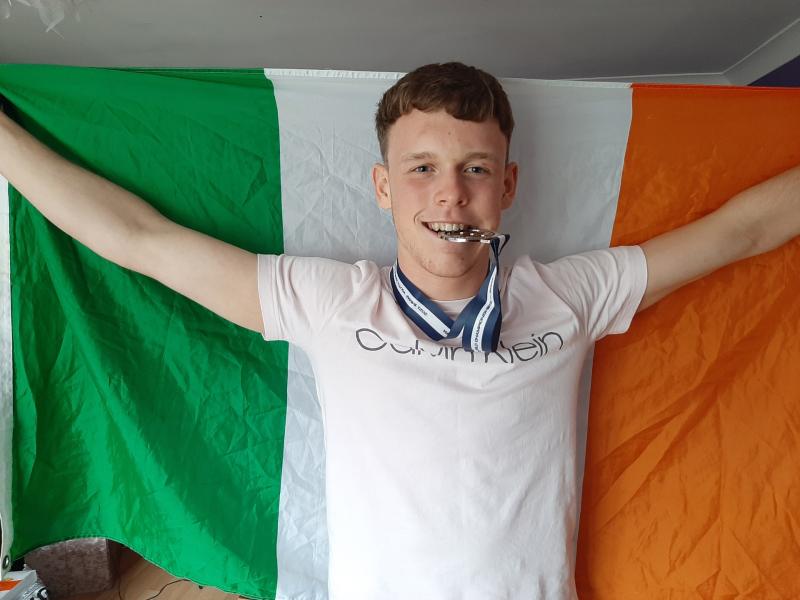 TULLAMORE MMA star Jordan Scully has been selected to take part in the adult World Championships in Abu Dhabi later this month.

The young man emerged as a real force in mixed martial arts when he won a silver medal at the IMMAF youth world championships in Bulgaria last summer.

Jordan turned 18 last September and his local club, SBG Tullamore, revealed at the beginning of this month that he had been chosen to represent Ireland again, this time at the adult IMMAF championships, a “huge honour” for the young man.

The club described him as “one of the most dedicated amateur mixed martial artists” they have and though some money from the IMMAF fund will help him make the trip to Abu Dhabi, they also launched a GoFundMe account.

In his personal message on GoFundMe (log on to -

“Any help would be greatly appreciated,” said Jordan.

“It is a great honour to be chosen to be a part of the Irish team and represent my country again.

“I am an 18-year-old man and I have autism. I am so proud of myself for getting to this level, winning silver at the previous youth world championships and I hope to make it to the UFC.

“Thank you to anyone who has helped me so far on my journey.”

Five days after it was set up, the GoFundMe had attracted massive support and by lunchtime on Monday €1,710 had been donated.

Last year, at the 2021 IMMAF (International Mixed Martial Arts Federation) Youth World Championships in Sofia, where he was guided by his coach, Tullamore man Kieran Davern, Jordan used his all-round MMA skills to make it to the Youth A final and was only beaten for gold by another young Irishman, Max Lally from Naas, Co Kildare.

He had got the better of opponents from Bahrain, Lebanon and the Czech Republic on his way to the gold medal bout.

On his return home Jordan told the Tullamore Tribune that he expected to do well at the youth championships: “I knew for a fact I was going to get a medal. I was confident I was going to be world champion.”

He added: “Obviously it didn't go my way but I'm always looking forward to next year. All you can do is keep moving forward. That's the way I'm looking at it.”

The IMMAF had to cancel the 2021 adult world championships in Kazakhstan because of the Covid-19 pandemic but in November they were rescheduled for Abu Dhabi in the United Arab Emirates (UAE) and will run from January 24 to January 29 next.

IMMAF President Kerrith Brown said they will be the sport's “greatest championships yet” and he thanked the UAE for stepping in “at extremely short notice” and for agreeing to also host the youth championships for the next three years.

“Our shared commitment to the vision of developing MMA in the UAE and internationally is very powerful and has vast potential. We at IMMAF are grateful for these opportunities and are excited for the future growth of our sport and its talent in the region,” he said.

Because Covid forced the cancellation of the 2020 adult world championships, this month's event will be the first since 2019 when about 450 athletes from 49 countries took part.