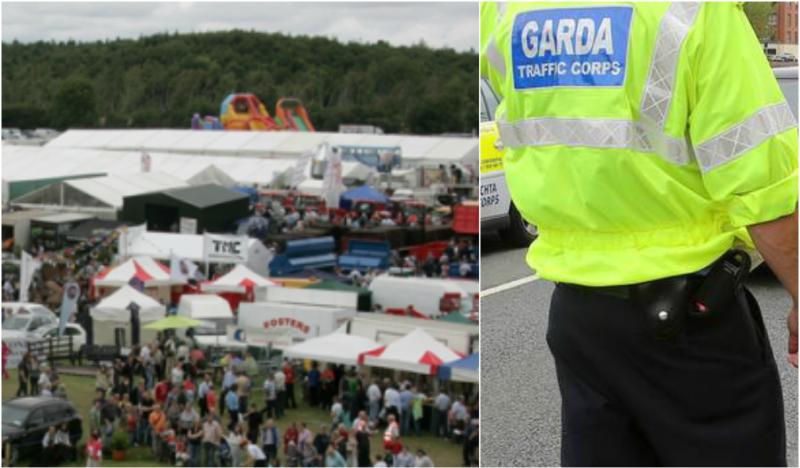 Gardaí have released the traffic plan for the 2019 Tullamore Show on Sunday, August 11.

Patrons attending the show are asked to disregard Sat-Nav/Google Maps and to follow the Road Signs for Show Parking.

The management of traffic is the primary role of An Garda Siochana in relation to this event. There are four large car parks amounting to 240 acres selected to accommodate visitors.

The four car parks and their selected entrances are strategically located. Dedicated routes have been selected leading directly to the car parks as follows:

Alternative Routes have also been selected around Tullamore for traffic not attending the event in order that they can avoid delays. Those alternative routes will be communicated to the public via the media and internet in the days leading up to the event.

Car Parks are located as follows:

Tullamore Car Park (Green) has approximately 100 acres of parking and will accommodate all traffic from the North and North East.

Traffic approaching from Kilbeggan, Edenderry and Portarlington will follow the Tullamore By-Pass and take the N52 to this car park.

A contraflow system will operate from Mucklagh to the Car park entrance both in the morning and in the evening. The N52 from Tullamore to Blueball will be closed to passing traffic from 7am to 9pm in order to accommodate the event.

Athlone Car Park (Yellow) has an approximate size of 30 acres and will cater for traffic approaching the event from the West and North West.  Traffic approaching from Athlone will be diverting off the motorway via Tubber, Clara, Coolnahiley, Rahan and into this car park.

Birr Car Park (Red) has an approximate area of 52 acres and will cater for traffic approaching the Event from the South and South West. In addition, an extra 50 acres of car parking space is available in an adjoining field.

Portlaoise Car Park (Blue) has an approximate area of 48 acres and will cater for traffic from the East and South East.  All traffic approaching from Portlaoise on the N80 will be diverted at Killeigh and will approach the Car park via Killurin Cross, Blacklion, Clonterlough and Holmshill.

In addition, an area of this car park directly off the N52 will act as a Bus Park accommodating buses bringing patrons to the event. Patrons from this car park will cross the closed section of the N52 to gain access to and from the Event Site.  One Garda and 6 Civil Defence personnel will be on duty at this location to manage the road crossing.

Disabled Car Park – A disabled car park is provided on the event site by organisers.  All vehicles displaying disabled signs will be directed onto the event site.  This car park will also accommodate elderly or infirm patrons.

All persons wishing to avail of Disabled parking should follow signage for “Livestock Entrance” on the Greatwood Road.

Parking Restrictions: Parking restrictions will apply in the environs of the event particularly:

(A) From Mucklagh to Blueball
(B) From Blacklion to Portlaoise Car Park
(C) From Blueball to the Event Site
(D) From Screegan via Glaskill and Agall to the event site (The emergency route).

Local people will be advised of the Road Closures and Parking restrictions. Householders directly affected by road closures will receive written notification of traffic arrangements.