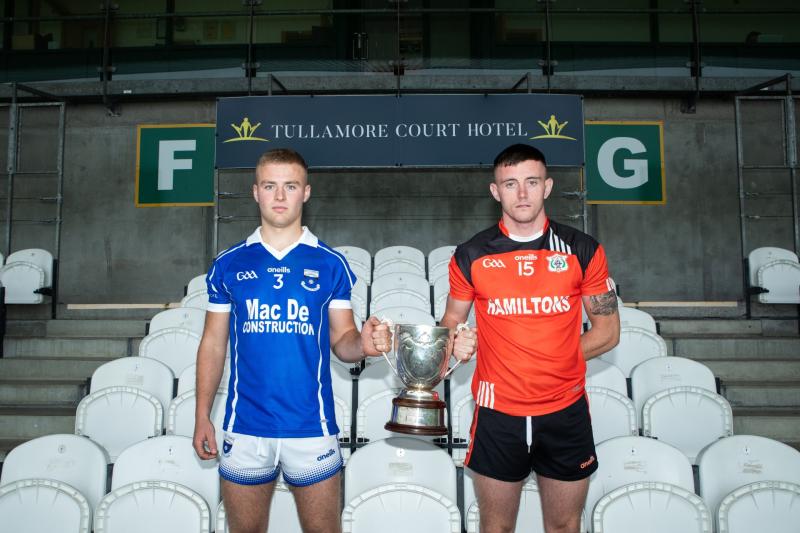 Pictured ahead of the Tullamore Court Hotel Offaly Intermediate Football Championship final at O'Connor Park next Sunday were Aidan Bracken of Ballycommon and Dylan Hyland of Raheen.

THERE is no such thing as a one man team and unsung heroes often emerge in finals but two players in particular will have a huge bearing on the destination of the Offaly Intermediate Football Championship.

Ballycommon's David Dempsey is likely to be tasked with marking Raheen's ace forward Dylan Hyland and the outcome of this tussle will go a long way to determining who wins.

Raheen are the favourites and have been from the start of the championship but make no mistake about it, this final is ripe for an upset and if Dempsey can limit Hyland's influence, Ballycommon will have one mighty chance.

First a bit more about Dempsey and Hyland. Both are two outstanding footballers, the best and most important in their two clubs.

Dempsey's development in the past few years has been great to witness. He has really improved in the past couple of years in particular and is now in his footballing prime. He has got very physically strong and his leadership qualities have come to the fore for club and county.

No result will be a shock in this game but it will be the surprise of the year if Ballycommon don't ask Dempsey to shadow Hyland. They have other good defenders but putting anyone other than Dempsey on him would be asking for trouble – and if you do that with Hyland on the field, you will certainly find him.

Dempsey is the one man Ballycommon possess that has the ability to mark the Geashill man and this battle will be one of the highlights of an intriguing game.

While David Dempsey is a more established county player, it is far from guaranteed that he will be able to mark Hyland out of the game. Hyland is the best forward that either team possesses. He may be quite reliant on his left foot but he is deadly accurate from play and frees. He was an outstanding minor a few years ago and then spent time in Australia before returning home a couple of years ago.

His return has given Raheen a great boost. Quite simply it has transformed them from a team that was closer to relegation into one with title winning potential. Raheen got to the final last year where they were steam rolled by Clonbullogue – it didn't happen for them that day but they came up against an excellent team, full of confidence and absolutely flying on the day.

There is no Clonbullogue in the championship this year and Raheen have been very solid, impressive the whole year.

It should be a very entertaining final between two teams who look fairly evenly matched. Raheen are deserved favourites but both teams are capable of having off games, not performing on the big occasion. This adds to the intrigue of the occasion and it is very hard to know what way this will go.

Both have played very well this year, doing everything that has been asked of them. Raheen topped group one with three wins out of three – they got off to a flying start when destroying St Brigid's in the first round, beat parish neighbours Clodiagh Gaels in round 2 and had five points to spare over Tullamore in the third round.

Ballycommon also qualified for the semi-finals as group winners. They hammered Shannonbridge in their first game, drew with fellow parish men Daingean in the second and sealed top spot with a comfortable win over Ferbane in round 3.

Both had to work hard to reach the final. Ballycommon held off a strong Tullamore challenge to win by 0-13 to 1-8 while Raheen finished well to beat St Brigid's by 1-11 to 0-7.

Raheen have plenty of experience, along with some good young players. Conor Carroll has played senior for Offaly and is a very good target man in their attack. The Cloneygowan man is a physical player and he will have a big bearing on the outcome.

James Lalor is very important to Raheen. Another player who has improved significantly in a couple of years, he has played some very good games in the Offaly defence. He will be partnered at midfield by Declan Byrne, who has played underage for Offaly and is a fine player.

Raheen will be hoping that Lalor and Byrne can give them the edge at midfield but Tom Mealiffe is an ultra consistent performer for Ballycommon here while Michael Conneely has a great engine, and works so hard. Neither side will get a game winning edge here.

It will ulmimately boil down to their forward lines. Stephen Conneely and Gareth Mann have been in great form in the Ballycommon attack while Conor Dunne could emerge as a match winner – Dunne also played underage for Offaly. He didn't score in the semi-final but Raheen will be very aware of his pace, power and ability to hit the target.

It should be a fascinating game. Hyland will inflict some damage but Dempsey will concentrate on marking him, sticking to him like glue. He will sacrifice other aspects of his game with that in mind and you would expect him to limit Hyland's influence, to some extent at least.

There are plenty of other players who can step up to the mark. Raheen have a lot going for them but there is real potential for an upset here.