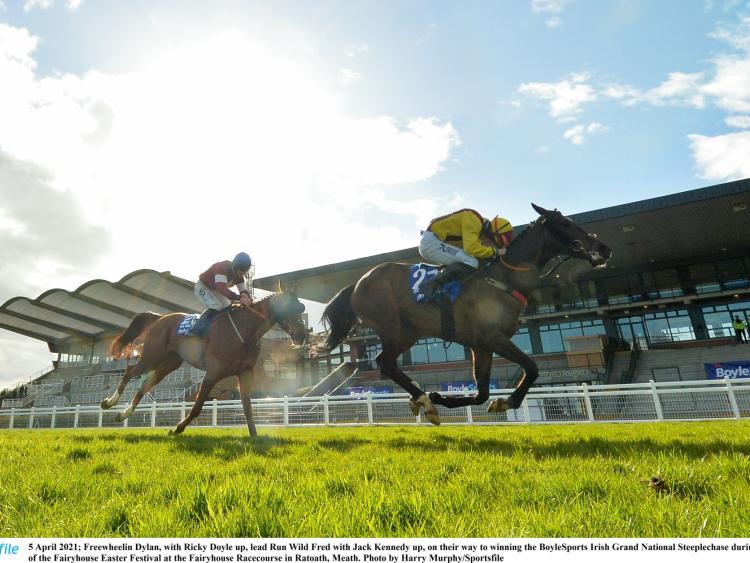 When Freewheelin Dylan made all the running and galloped to success in a 150/1 shock in the Irish Grand National of €400,000 last Monday, it brought back memories of his win last summer at Kilbeggan in the AXA Farm Insurance Midland’s National.

s trainer Dermot McLoughlin said, “He won the Midland’s National at Kilbeggan in the same way”.

It was a wonderful ride by Ricky Doyle (26), who got the brave horse into the same rhythm. It was a special day for trainer Dermot McLoughlin and owner Sheila Mangan, as there was a close association with the track.

Dermot was following in the footsteps of his father Liam McLoughlin, who worked with the great Tom Dreaper, and rode Kerforo to win the race in 1962. He was also the first jockey to win a race on the great Arkle in Navan in January 1962.

Freewheelin Dylan (the name relates to a Bob Dylan album) won three times in Kilbeggan between 2018-20 and there was no luck about his win, as he jumped brilliantly from fence to fence and when challenged held off the Gigginstown House horse Run Wild Fred to win by 1½ lengths.

As Doyle said, ” I could feel horses on my tail, two out but he kept picking up”.

The third horse home the very consistent Enjoy D’Allen 40/1, was only 4½ lengths behind the winner. This brought back great memories of Ciaran and Dot Loves success in the Irish Grand National with Liberty Counsel in 2012, who was also a big price at 50/1 and had won twice in Kilbeggan in 2012.

It would appear that Kilbeggan is a good place to prepare horses for the Irish Grand National! Another tip is “ignore the tipsters” and only back horses carrying weight from 10st to 10st 13 lbs, as horses in this category have won 9 out of the last 11 races, including the first three home this year!