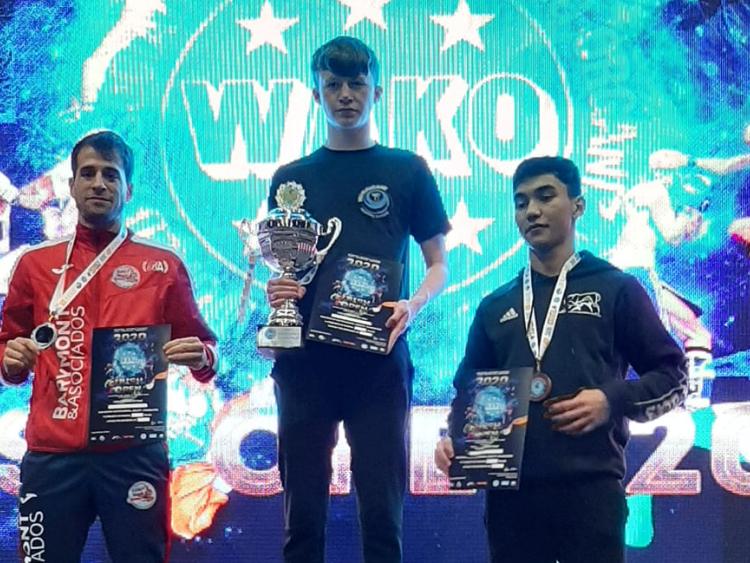 You can also note that Luke, at 16 years of age, has captured a Senior title in the most prestigious Kickboxing tournament in the world with two years left as a Junior (U19).

Roy Baker, as president of the World Association of Kickboxing Organisations (WAKO) and promoter of the event, had some hard calls to make in the weeks coming up to this event.

The COVID-19 outbreak across Northern Italy meant that all clubs in Red Zones were excluded and there were calls to cancel the event altogether, but in consultation with all the relevant health and government bodies, the decision was to go ahead. As in 2018 when “the Beast from the East” was overcome, 2020 was no different and 3,404 athletes from 33 countries turned up to try for a coveted title.

The smaller than usual Italian team were welcomed by all athletes and their quality was still there with Team Bestfighter winning the coveted Ladies Team Event, Carol Scacchi, Alessia Costanzo and Francesca Ceci were magnificent.

The Edenderry-based club star fighter was McCann. Despite a sluggish start for Luke on Friday losing a close semi-final to Scotland in the -57 Kg Junior Light Contact, he picked up a win v Portugal in the senior event to qualify for the Saturday semi-final v Italy.

The overnight rest seemed to serve Luke well and he made no mistake in the semi-final v Italy and final v Spain to take the title with ease winning all three fights on all three judges scorecards. In Pointfighting, Luke also picked up a bronze medal
in the Junior -57 Kg section losing out to Hungarian Patrik Cselovszki of the Kiraly Club, revenge for Luke in the Senior -57 Kg section beating Patrik in the semi-final only to lose out to Russian Grigory Langavyy of CSKA in the final but finishing the tournament with 4 medals is not a bad return.

Team Hurricane, for the first time ever, entered the Senior Team event and drew the US All Stars Team in the 1st round. The teams matched up as Nathan Tait v Kevin Walker, Luke McCann v Jack Felton, Robbie Cuffe (CKA) v Elijah Everill and Jay Daniels v Raymond Daniels.

This was really a David v Goliath showdown, the Edenderry team v the World No.1. The final score was 11 to 18 in favour of the US All Stars but 4 tight matches with Nathan and Luke edging their US opponents with Luke bearing the brunt of some late hits. The US All Stars went on to win the tournament with Jack and Elijah winning individual sections and meeting in the Open Weight Grand Champion final with Elijah taking the win.

There were fantastic results in the KATA sections also with coach, Ailish Kelly, beaming afterwards. First up was Luke McCabe winning a silver medal in the Younger Cadet Open Hand section, Saibh Kelly on the road to recovery after a serious knee injury also took silver in the Junior Black Belt section and bronze in the Senior section, Louis McGlinchey finished just outside the
medals.

Leah Grant had a return to form also with a hard-earned bronze in Junior -65 Kg beating UK and Canadian fighters before losing out to Jodie Brown in the semi-final. Lauren Grant lost close matches in her 2 sections, Senior Ladies -70 and +70 Kg with Marta Sellati(Italy) and Alexandra Krapivina (Russia) taking the titles.

The younger team members, Shannon Conlon, Abigail Farrell, Ross and Alex Keyes all recorded wins in the sections but no medals this time. The Tait brothers Brandon and Nathan had a frustrating weekend, Brandon losing out to Richard Veres in his section before recording a convincing win in his Grand Champion pool before going down to Enrique Letona in the 2nd round.

Nathan had good wins in both the Junior and Senior -63 Kg sections before losing out in both quarter-finals. As always, Darren Tait, was a volunteer referee all weekend and worked tirelessly on Tatami 11 for all 3 days. Titles also for local athletes Naoise Colvin fighting for Tallaght Martial Arts and Conor McGlinchey fighting for Team Proper (USA).