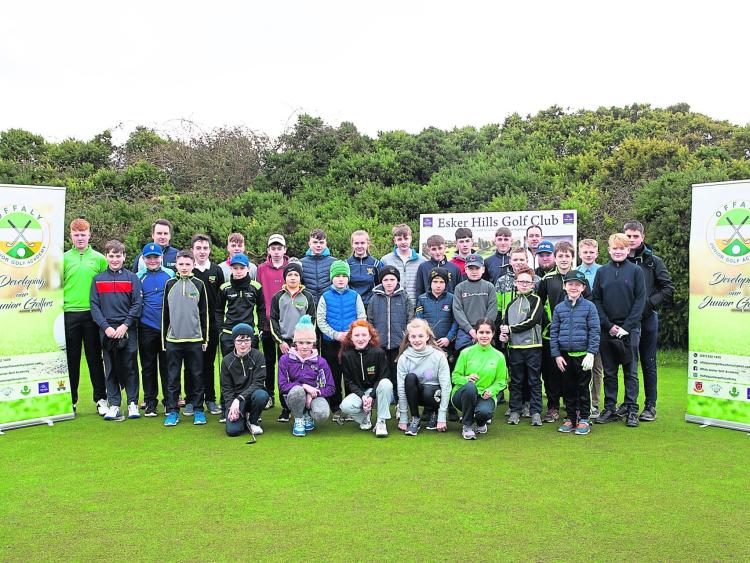 Making golf a sport for life was the theme of the day in Esker Hills golf club last Saturday as the five Offaly golf clubs came together to launch the new Offaly Junior Golf Academy aimed at helping the next generation of golfers fulfil their full potential.

The county-wide initiative that includes Esker Hills, Tullamore, Birr, Edenderry and Castle Barna Golf Clubs will aim to support the participating clubs, and develop the skills of kids by providing professional coaching to those selected.

Chairperson, Brian Monaghan addressed the large crowd in attendance and insisted that this venture was all about developing junior golfers and aiding them in fulfilling their potential.

Open to all junior members of all five clubs, the academy will select a panel of young golfers from two selection days that will take place on February 17 and 21.

Speaking at the launch, PGA professional and committee member Bernard Quigley stressed that while they do have to pick a panel, there will be no one left behind with additional open coaching days also scheduled for all juniors who don’t make it at the selection days.

With at least one person from each of the five Offaly golf clubs on the committee, Brian Monaghan paid tribute to those who have put in massive work to get this off the ground and to the clubs in general for buying into the concept and for their support and backing to this exciting new initiative.

Mr Monaghan also thanked the parents for the work they do in driving the kids around the place and supporting their children, and looked forward to their continued involvement in academy activities.

In terms of finance, Mr Monaghan explained that they have secured a five-year financial commitment and especially thanked local businessmen, who approached the junior development committee at Tullamore about the possibility of setting up an Offaly Academy. Mr Monaghan also thanked all those who have kindly offered to provide additional sponsorship to the Academy to assist in its development.

It was also fitting that the launch was in Esker Hills, the home of Offaly’s Open Champion – Shane Lowry and Mr Monaghan told the crowd that he hoped that his success would be the catalyst for driving on the next generation.

In terms of the coaching that the Academy will provide, two PGA professionals are on board in that department. Current Tullamore PGA professional Bernard Quigley and head of Leinster High-Performance programme, Eamon O’Flanagan, will be doing their coaching out of Rahan and Clara driving ranges while there will also be five open sessions, one at each participating Golf Club for any junior member of these clubs at dates to be decided throughout the year.

Bernard Quigley remarked that this venture was the first of the kind in Ireland and that he was excited for Offaly being the leader when it comes to junior golf.

With 104 junior golfers already signed up to take part in the selection days, there is a huge appetite for golf in the county and this new academy looks set to develop and nurture them into the future with the backing of all the clubs in the County. Mr Monaghan further thanked the Confederation of Golf in Ireland for their support and assistance in the setting up of the Academy and their commitment to supporting the venture.

Read more sports coverage from around the county in this week's Tullamore Tribune.