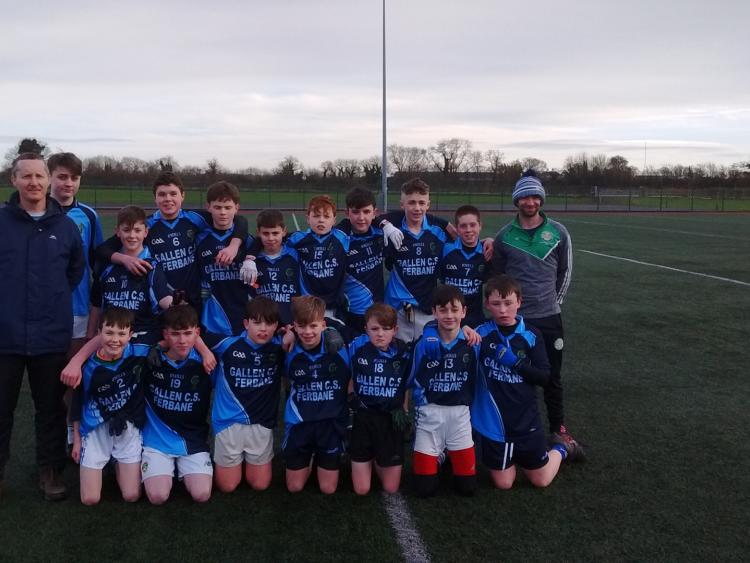 The game was played on the 3G pitch in the Meath Centre of Excellence in Dunganny.

This was a power-packed display by the Ferbane school with the Drogheda lads having no answer to the Brosnasiders fast-flowing direct football.

Gallen CS seemed suited to the 13-a-side format which enabled their speedy two-man full-forward line to create space for the dynamic half-forward line to rush into and set up and take scores.

Gallen, aided by the breeze but playing into the strong sun, got off to a great start with points from Daniel Kelly and Dara Hynes before Lee Moore's 45 went the whole way to the Drogheda net, the Drogheda keeper perhaps losing the flight of the ball in the glare of the strong sun.

Daniel Kelly with a brace, Lee Moore and Dara Hynes added points before a three-goal blitz in a 7-minute spell from Fionn Claffey (2) and Daniel Kelly effectively put this game beyond the reach of St Olivers. Gallen had scored 4-8 without reply by half time with St Olivers having a penalty well saved by Colin Murray.

Credit must go to St Olivers Drogheda who began the second half with a goal and a point from their elusive number 15. The Drogheda lads then got a second goal from their excellent hardworking number 11.

Gallen replied in style with three further second-half goals with Fionn Claffey completing his hat trick, Daniel Kelly scoring his second goal and Gavin Egan getting a three-pointer. Drogheda scored a consolation third goal to round off the scoring.

This win provides a great boost for first-year football in Gallen CS and might be a springboard for possible future successes.