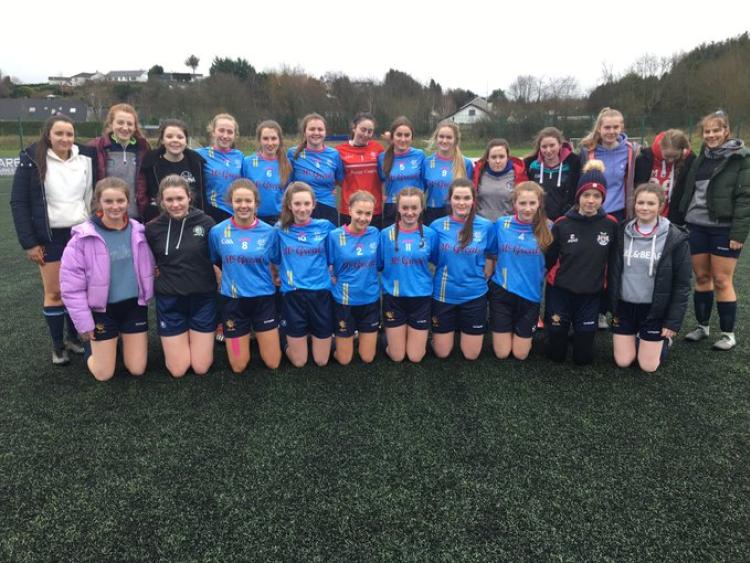 Killina Presentation Secondary School are just one step from the summit in the FAI Schools Senior (U20) B Girls cup. Standing between them and All Ireland glory is Midleton College from Cork.

The Killina girls will be quietly confident, having dismissed all challengers to date, however, they will be under no illusions that they will be facing formidable opponents in Midleton College, who have been equally impressive in their campaign to date.

One department the Killina girls won’t be lacking in is experience. In the last two years, soccer has exploded in the Rahan school, with U15 and U17 national titles annexed. Backboned by players from Peamount, Mucklagh, Tullamore, Clara and Killeigh clubs, these girls are fast-becoming serial winners.

An indication of the quality and standard within their ranks would be Becky Watkins’ international call-up last year to the Ireland U16 and U17 squads, where she shone in international tournaments with scoring debuts.

However, the real strength of this Killina team is not a reliance on one or two exceptionally talented individuals, but rather the
balance of the first 11, and the strength in depth of the panel, as evidenced by the contributions from the bench on several occasions throughout the campaign.

One factor which makes this group’s achievements to date is the age of the panel: the majority of the girls will also be contesting the U17 Leinster final on Friday of this week.

While girls’ soccer is a relatively new departure in sports in Killina, thanks to the input from Mucklagh club, facilities have been developed in the school; dressing rooms have been built, and as part of the recent development of grounds around and adjacent to the school, they now have their own soccer pitch and can host their own games. Killeigh FC have also been very helpful in providing their excellent facilities in the campaign.

The school is currently on the crest of a wave, but the development of these facilities indicates that there is potential for further success stories well into the future.

The Killina defence has been miserly in the extreme thus far. Led by captain and goalkeeper Ciara Glackin, Killina have only conceded three goals in four games. Marshalling the defence is Emma Flaherty, while players such as Ciara Heffernan and Rachel Dillon have ably deputised when called on.

Killina have been dominant in midfield for long spells in their games to date, with the combination of screening the defence and creating an attacking platform for Ellen Dolan, Becky Watkins and Sarah Doyle, who have formed a potent front line.

Path to the final

Killina had wins over Larkin Community College and last year's winners St Laurences to advance to the Leinster final where they defeated Wilson's Hospital. In the National semi-final, they defeated last year's finalists, Mulroy College.

In the other All- Ireland semi-final, Midleton College proved their credentials as a durable outfit, with an extra-time win over St Patricks, Killala, from Mayo. Hannah Roch Perks once again proved to be one of a number of stellar performers for the Cork outfit, scoring twice in a 3-1 win. Prior to that, they had a nail-biting sudden death penalty victory over Coláiste Mhuire, Askeaton, in the Munster Cup final, so no doubt they are a battle-hardened unit.

With two quality teams facing off, it’s very hard to call who will prevail. Killina have answered all questions to date in fine style, but will face opponents that know how to come out the right side in tight games, so a titanic battle is in store. Killina will be hoping to have enough class to see themselves through, but they have been long enough on the road now to know that this will be far from easy, and mentors Graham O’Connor and Philip Austin will ensure that there can be no complacency.