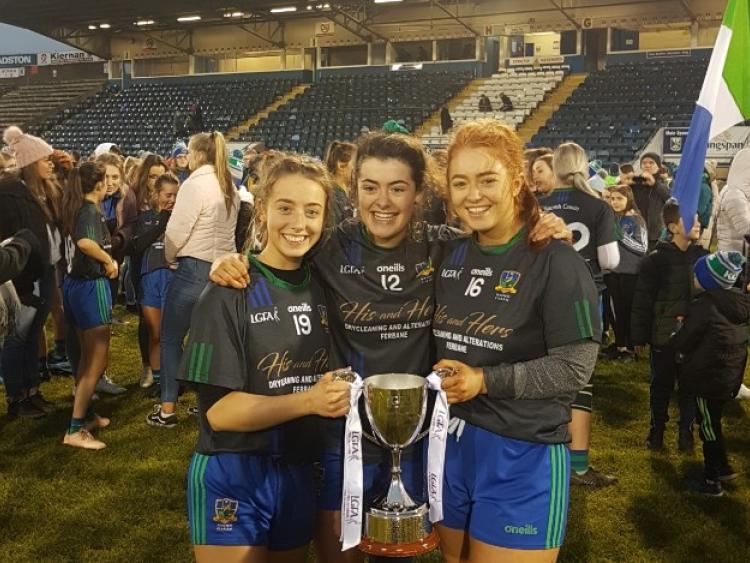 Not for the first time this year Doon crossroads were lit up last Saturday night with fireworks, bonfires and blue lights as Naomh Ciaran rolled in as All-Ireland champions.

There were jubilant scenes on the crossroads where a large crowd gathered to welcome home the champions when the stopped off in Doon on there way back to Ferbane.

Doon GAA put on a great show as the crowd gathered cheered on the champions under a sky lit up with fireworks. It was nothing less than this great team deserved as they gave new meaning to the term "icing on the cake" by bringing an All-Ireland title back to west Offaly this year.

After a hugely successful year for west Offaly clubs which saw Doon, Ferbane and Shannonbridge win the Junior A, Senior A & intermediate championships, this wonderful Naomh Ciaran team, which incorporates all three aforementioned clubs along with Ballycumber and Erin Rovers, brought the success rate to another level.

Doon trio Kaitlin Rigney, Sinead Egan and Aoibhe Kelly were joined on the crossroads by the rest of the Naomh Ciaran panel as they sang and danced in what was an electric atmosphere and one that will live long in the memory. Kieran Rigney senior told us he was "very very happy, couldn't be any happier as he has seen Doon teams and what they achieved since 1942."

Last Saturday night, Kieran, at 89 years of age, was there on the crossroads in Doon to witness the Naomh Ciaran team bring home the All-Ireland intermediate title, a team that includes his granddaughter Kaitlin Rigney.

Doon GAA club president Billy Healy said he had "seen a lot over the years but this was absolutely brilliant."

After yet another steely performance in Breffni Park Cavan earlier in the day, Naomh Ciaran yet again showed tremendous character by coming back from five points down late on to win by two points on a scoreline of Naomh Ciaran 2-11 Naomh Pol 2-9.

Thanks to everyone who helped out in Doon.

Well done Girls you have brought great pride to the entire community and on behalf of everyone at Doon GAA we say congratulations on this magnificent achievement and we look forward to a big future supporting Naomh Ciaran.