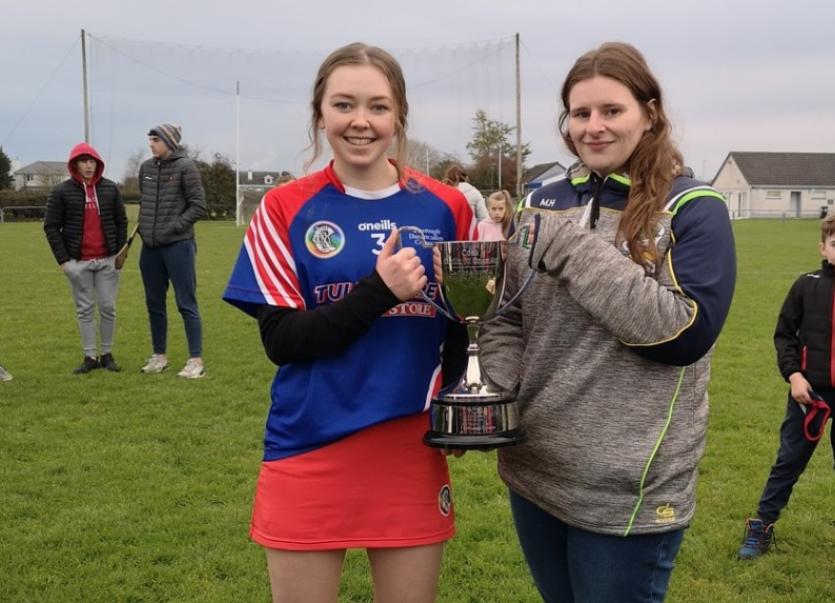 Lusmagh/Drumcullen were crowed the Hynes/School of Motoring Minor A champions once again having defeated Shinrone in the A final last Saturday afternoon in a bitterly cold Carrig GAA.

The current champions have managed two titles in one year as the 2018 final was won back in February of this year due to the terrible weather conditions Ireland experienced last winter.

The game was an exciting from the throw-in when Sinainn Glynn took a great pass from Caoimhe Darcy to point the first score of the game. Lusmagh/Drumcullen got off to a dream start when Kaitlyn Kennedy free landed in the danger zone for Shinrone but Emily Doughan's save fell to the path of Clodagh Leahy who flicked the ball past the keeper and Lus/Drum had their tails up.

Shinrone will be no doubt ruing their missed chances as the next two plays seen Shinrone miss two scoreable points. Lus/Drum made no mistake to score when the opportunity arose when Charlotte Quegan gave a perfect pass to Elaine Troy who opted to point herself but had plenty of options as she ran towards goal. Shinrone began to come into the game as Emma Bergin almost had a goal chance but the packed defence of Lus/Drum kept the Shinrone pressure at bay. Shinrone would be eventually rewarded for their efforts when Ciara Sammon pointed Shinrone's first score of the game from a placed ball.

Kaitlyn Kennedy continued her fine form as she pointed a placed ball to make to 1-3 to 0-1 after ten minutes. Shinrone worked hard to raise the green flag when Sharon Shananan found Orla Maher with her clearance however Maher's shot was eventually hit wide as Amy Byrne did well to shield Maher out of a dangerous shooting position.

The game began to escape Shinrone as a great play from Lsu/Drum seen Elaine Troy catch a Lauren Temple pass who passed to Clodagh Leahy, Leahy found Labhaoise Glynn whose shot was stopped once again by Emily Doughan but Troy was on hand to finish the ball from the rebound.

Kaitlyn Kennedy added two points to Lus/Drum's tally with a point from play and placed balls and her teammate the ever commanding Amy Byrne also added a point of her own from play breaking through the middle from centre back to raise the white flag just before the half time break.

From the restart Lus/Drum dominated the game however Shinrone tried hard to grasp the game back, Sharon Shananan, Leah Ryan, Jane Cleary, Aoife Maloney and Orla Maher all worked tirelessly throughout the game. Labhaoise Glynn had a super second-half performance as the youngster holds electrifying pace and she created lots of scoring opportunities and scores including the first point of the second half.

It was another Labhaoise run that eventually caused a penalty to be awarded and Kennedy stepped up to put the ball over the bar. Lus/Drum were on the hunt for a goal when Clodagh Leahy's groundstroke rolled across an empty goalmouth from a scramble but the green flag wasn't raised and Elaine Troy doubled on the ball on the way back and it managed to hit the post to the excitement of the Lus/Drum fans and it eventually went out for a '45.

The ever accurate Kaitlyn Kennedy converted the '45 and the game was well and truly over at this stage. The link-up play from Rebecca McGarry, Charlotte Quegan and  Labhaoise Glynn was incredible throughout the game. The score of the game came when McGarry found Charlotte Quegan who initially fumbled the pass to ground, Quegan flicked the ball high into the path of a beeline run from Kaitlyn Kennedy who caught the ball and put the ball over the bar from 50 yards. Shinrone tried hard into the closing stages of the game by pushing Sharon Shananan up the field but her efforts were hooked and blocked as Shinrone struggled to get scores on the board.

As the game came to a close Kailtyn Kennedy and Clodagh Leahy exchanged points as another contender of score of the game came from Amy Byrne when the centre back intercepted a Shinrone pass, broke up the middle of the field and put the ball over the bar. Ciara Sammon added a point for Shinrone in the final minutes of the game but this score was cancelled out by a Clodagh Leahy point when Kieran Pat Kelly blew the full time whistle.