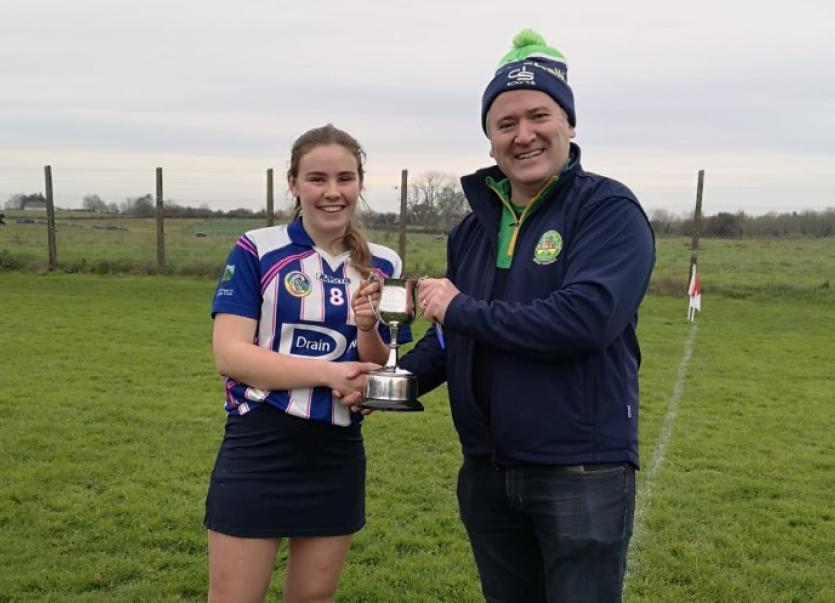 Despite the full-time scoreline, the game was a much tighter affair and offered endless excitement to all the spectators at the game. Kellie Kinahan got Kinnitty Sinchills off to a scoring start when a flick from Eabha Flanagan fell into her path for the mid-fielder to pop over the bar.

Roisin Pinches a player is is still quite young was a handful all day for Kinnitty/Sinchills as the corner-forward broke through with a ball into the danger zone and pointed to make the sides level.

Sharpshooter Elaine Hanlon scored her first score of the game from a free as her free taking abilities would help her side be crowned champions later in the afternoon. Roisin Pinches again worked hard to score a goal however her effort eventually resulted in a point.

Kin/Sin answered back however when Rachel Dillon caught a St.Cillians puckout to find Aoife Bergin who put the ball over the bar with ease. St.Cillians continued to edge in front when Grace Cashen added a point from play. Sarah Freeman had a terrific game as wing forward for St.Cillians and she added St. Cillian's fifth point of the afternoon from a super run down the wing and shooting over the bar.

Shauna Byrne, who was very influential in the u16 B final earlier this year, was back on her free-taking duties pointing a free to put just one between the sides. The game was slow to get exciting but Byrnes next free deceived all of the St. Cillian's players and ended up in the back of the next which push Kin/Sin ahead with 15 minutes played.

Kin/Sin had a purple patch for the remainder of the first half with Rachel O'Donoghue added a point to give Kin/Din some breathing space. Pinches, however, kept her side in the game when Niamh Costello found Pinches from a placed ball to raise the white flag.

Kin/Sin almost had their second goal of the afternoon when Aoife Bergin found herself all alone to shoot but Caoimhe Rice blocked her shot and the goal protector Kasey Larkin cleared the rebound from the goal mouth to Rachel Donoghue who pointed from 40 yards out.

St. Cillian's played very well in defence, in particular, Cara Hoare continues to develop into a great defender and she even managed at one stage to clear the ball with her hurl broken in half. Player of the match and birthday girl Roisin Pinches, however, was a force to be reckoned with as a long shot from Sarah Freeman was stopped by Miriam O'Neill but somehow Pinches managed to get on the rebound of the shot and score a goal on her knees and breaking the keepers hurl all in one play. When the halftime whistle blew St.Cillians lead 1-7 to 1-5 with no breeze affecting the game.

At half time St.Cillians introduced the talented Claire Hogan who suffered an injury in the semi-final and she made her presence known almost immediately when dipped and dodged through the Kin/Sin defence to point from the throw-in. Pinches added another point when Sarah Freeman found her teammate in space to put St.Cillians ahead and out of the danger zone.

Shauna Byrne did her utmost to keep her side in the game with two frees in a row. There was a goalmouth scramble then for Kin/Sin when Rachel O'Donaghue's shot was saved and cleared by Cara Hoare to Niamh Costello who cleared the ball away from danger. This clearance was not enough however as Rachel Dillon collected the clearance and found O'Donoghue once again who was pulled in the small square and awarded a penalty.

O'Donoghue stepped up to take the penalty however she did not connect with it cleanly and the shot was stopped on the line. O'Donoghue was quick to pounce on the rebound and managed to score a goal bringing her side back into the game.

Aoife Bergin also had a fine game for Kin/Sin and her workrate was rewarded when she scored Kin/Sin's third goal of the game as the momentum swung in favour of Kin/Sin. Sarah Freeman and Claire Hogan added points for their side and it looked to be a nail-biting finish for both teams.

Roisin Pinches and Sarah Freeman exchanged points as the game entered the closing stages. Kin/Sin struggled to make a comeback as Jade O'Meara put the final nail in the coffin for Kin/Sin as she pounced on Miriam O'Neill's mistake to flick the ball into the back of the net. Claire Hogan added the final score of the game as St. Cillian's were crowned Minor B champions for 2019.

Player of the Match: Roisin Pinches. Roisin Pinches was exceptional for St.Cillians, she caused havoc the whole game scoring 1-5 and celebrated her birthday also on the day!