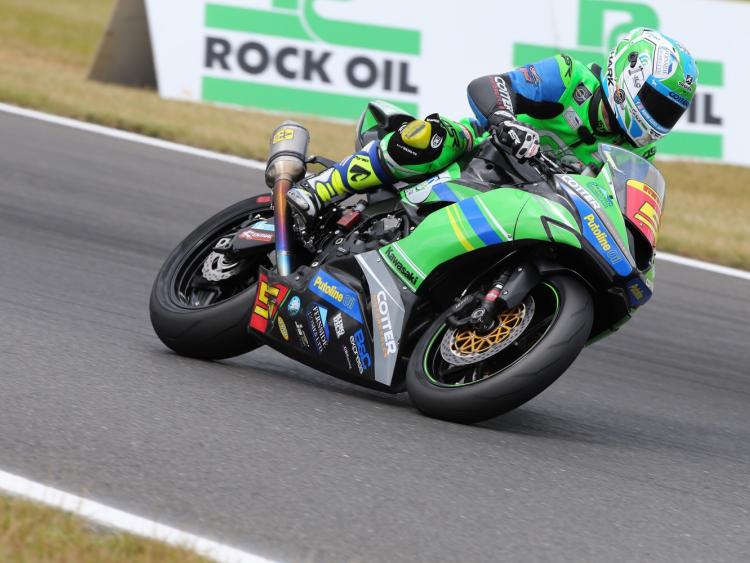 The 2.4-mile track of the world-famous Brands Hatch race circuit played host to the final round of the Bennetts British Superbike Championship last weekend.

Having already signed with his team, G&S Racing for 2020, Edenderry native Kevin Keyes was relishing the opportunity to show his abilities without any background pressure.

Those abilities did show throughout Friday as he took to track for Free Practice 1 & 2 on his Fernside Homes G&S Racing Kawasaki 636 in the wet and cold conditions. He placed third and second respectively after his team and himself worked hard on the bike set-up.

Qualifying on Saturday was another tricky session with track conditions changing throughout the circuit. The cooler October conditions left the sunshine struggling to leave a dry racing line under the overhanging trees on parts of the track.

Keyes worked hard though, swapping between positions 1-4. With just 4 minutes remaining of the 25-minute session, he was on a very quick lap having made enough time in the first two sectors to leave him in his first-ever Superstock 600 pole position, but an abrupt red flag brought an early end to proceedings and his lap.

He ended up finishing in 4th position, at the front of the second row for Sunday’s 12-lap race.

Race time came on Sunday in glorious sunshine in the Kent countryside of the UK. The race got off to a somewhat frantic start, with positions not really being sorted until well into the second lap. At this stage, Keyes was fighting hard in third place and just tenths off first.

He did progress to the lead at the first corner on lap 6 and held the lead for the next two laps. Despite dropping to second at times, he was always on the attack and always fighting for that first place. By lap nine, just as the safety car came out, Keyes was pushed back to third and from there, there was a big battle with a number of riders who were battling for their best finishing championship positions. Keyes eventually finished in 5th place just four-tenths behind the winner.

Afterwards, Kevin told us: “This weekend was very good, I really enjoyed the race it was nice to lead the race for a bit and be in a battle for the podium again, just gutted not to make the podium. Now onto sunflower next weekend I can’t wait to ride back home again on my G&S Kawasaki and I’m really looking forward to it. As always a huge thanks to my sponsors because without them I can’t do it."

The final action of the year for the young Offaly man sees him return to action on Irish soil at the Sunflower race in Bishopscourt, Downpatrick, next weekend.

A track where Keyes had a lot of success in his earlier racing career, he told us he is really looking forward to riding for G&S Racing in the Supersport Pro races on his Superstock bike.