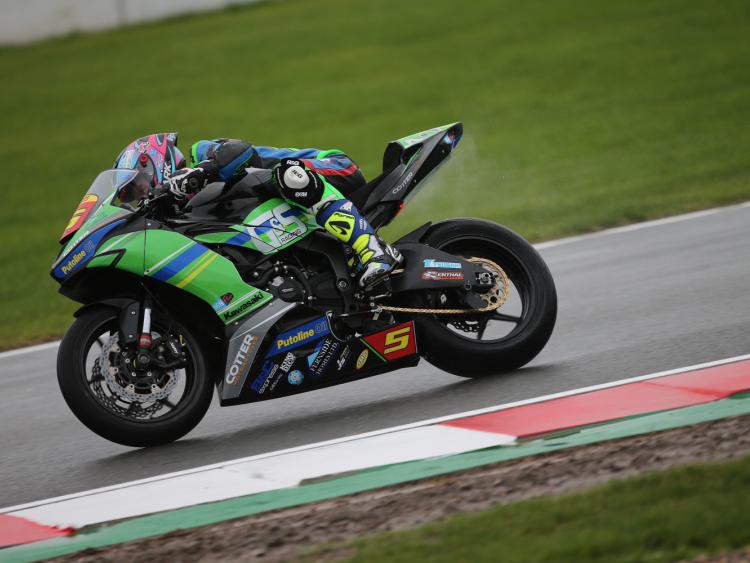 Good and bad points at Donnington for Offaly racer

Qualifying on Saturday turned out to be a completely dry session in which Keyes struggled somewhat. Despite coming in halfway through the session for set-up changes, that ‘sweet spot’ just couldn’t be found and he ended up in 13th place for Sunday’s race.

But with the weather forecast now updated and more rain due for the first half of Sunday, neither him or his team were overly concerned as they knew they had a good setup for wet conditions.

Sunday started off very well for Keyes with the early morning warm-up. He went out in the wet finishing in first place, over two seconds a lap ahead of the rest.

The joy that came with that was to be short-lived though as the rain soon ended and the track started drying quickly.

Keyes gave it best from the very start for the race itself but knew he had a big challenge ahead of himself starting from the fifth row on the grid. He started well and at the end of the first lap, he gained one position moving up to 12th.

He held that position even after losing one of his knee sliders on lap three, until lap five when a crash in front put three riders out. Although he did gain those three spots, he lost touch with the group he was in, dropping back to the group behind as he had to take action to avoid that crash in front.

He held that 9th position for a few laps after the safety car laps ended but he just couldn’t get the feeling or feedback from the bike to progress position and finished the race in 10th place.

Kevin said afterwards: “This weekend had its good and bad points but overall it was an enjoyable weekend on the bike. Although it’s not the result I wanted, it's the best we could salvage.

"On lap 3 I lost my right knee slider, leaving me trying to keep my knee off the ground with it sometimes catching and causing my leg to get pulled back. I’m looking forward now to attending the Spirit of Dunboyne next Sunday, hopefully, we’ll see a great crowd there to support the event.”

The final round takes place at Brands Hatch on the weekend of October 20 where Keyes will be looking to end his BSB year on a good note.

Next weekend though, he’s taking part in the parade laps at the Dunboyne Motor Club “Spirit of Dunboyne 2019” event.