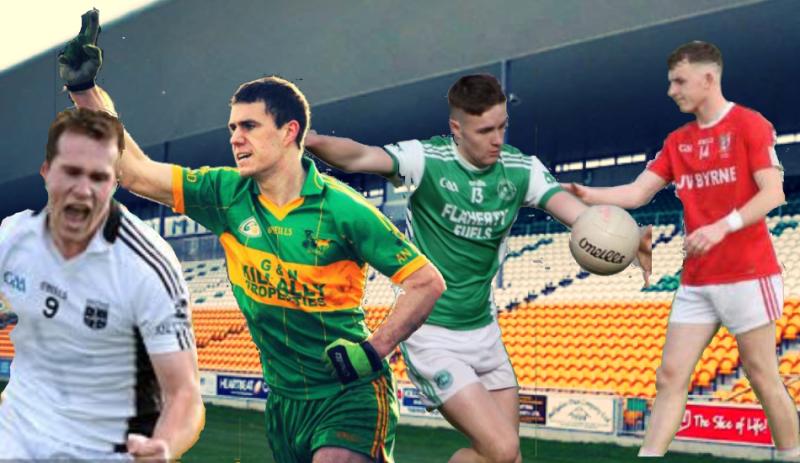 The Offaly Senior Football Championship reaches the semi-final stage with a bumper weekend at Bord na Mona O'Connor Park on Saturday and Sunday.

Edenderry face Ferbane at 4.30pm on Saturday evening, September 28 with Rhode and Clara doing battle at 3pm on Sunday, September 29.

First up on Saturday is the clash of the so-called young guns of Offaly football - two clubs with thriving underage scenes and a wealth of emerging talent. Testament to that will be the intriguing battle of the opposing forwards; Cian Johnson for Ferbane and Cian Farrell for Edenderry.

John Maughan has already confirmed that both players will be brought into the senior Offaly fold in 2020 following their stellar underage careers, so this week could be a chance to shine in front of the county boss. They have played together at U20 level for Offaly but will pit their wits against one another this weekend in the hope of kicking their teams to a county final.

Edenderry have been the form team in this year's championship with a win over old foes Rhode on the opening day the standout result. That win ended a remarkable 18-year unbeaten run in the group stages of the Offaly Championship for Rhode who compete in the opposite semi-final this weekend.

The Reds scored a total of 99 points and conceded an average of just 11 points per game during their peerless round-robin phase, beating Rhode, Clara, Cappincur and Gracefield. They had two points to spare over Rhode, 12 over Clara, 16 over Cappincur and 25 over Gracefield. They had the second tightest defence during the group stage, conceding 44 points. It's interesting that the only team to concede fewer scores will be the opposition this Saturday - Ferbane.

They themselves have grown into the championship after an opening day defeat to Clara put them under pressure in a bizarre format. They won the next day, as expected, against the struggling Cappincur, but the seven-point margin wasn't as convincing as some of their rivals in the same fixture.

They piled the misery on Gracefield with a comfortable 18-point win in their third game and finished the group stage with a historic 1-9 to 0-8 win over longtime conquerors Rhode. It is perhaps that last game that will give the men in green and white the belief that they can banish the final pain of the last few years in 2019. It was the proverbial monkey off their backs and they grew into the campaign well, suggesting they are plotting to peak in October. A quarter-final win over Shamrocks followed and they look primed for battle.

The Odds: Edenderry are the 8/11 favourites with Ferbane priced at 6/4.

Verdict: A tight game despite the scoring prowess on show. Edenderry to win by two points.

Both of these teams have flattered to deceive in the early stages of the championship, both getting through to the business end thanks to a record of two wins and two losses.

It has been said in past seasons, and it is once again suggested that this Rhode team is one in decline. Niall McNamee, however, seems to be having a renaissance in the forward line and looks set to return to John Maughan's county fold next month. He is still the talisman and will keep the village in the game when Clara hit their inevitable purple patch.

Rhode started this year's championship with a defeat to old rivals Edenderry - on home soil too. It would have been a mild shock, not least in the evergreen village itself.

They recovered well to record a 10-point win over Shamrocks on their second outing but were made to work hard for a two-point win over Tullamore on matchday three. Tullamore later found themselves in a relegation scrap despite having the same amount of points as Rhode at the end of the round-robin phase. The criss-cross format and run of results on the final day meant Rhode's defeat to Ferbane was immaterial as the green and gold marched straight to this semi-final stage.

Their opponents on Sunday had a similarly tumultuous route to the latter stages with their fate up in the air right to the last round of group games.

Having won on the opening day against Ferbane, they lost heavily on a 2-22 to 1-13 scoreline to Edenderry on matchday two. Shamrocks heaped the pressure on the men in white with a surprise six-point win before Clara scrambled to a final day win over Tullamore to secure progression. They made light work of their quarter-final with Cappincur.

Clara conceded far too many points (66) in the round-robin stage to figure at this business end of the season and yet they have shown resolve despite poor form before.

Both Rhode and Clara scored the same number of points in the round-robin phase (57) but Rhode's defence was far tighter, as it always has been. That may be the difference again.

Verdict: Rhode to come good once more with a hard-fought win. Rhode to win by four points.