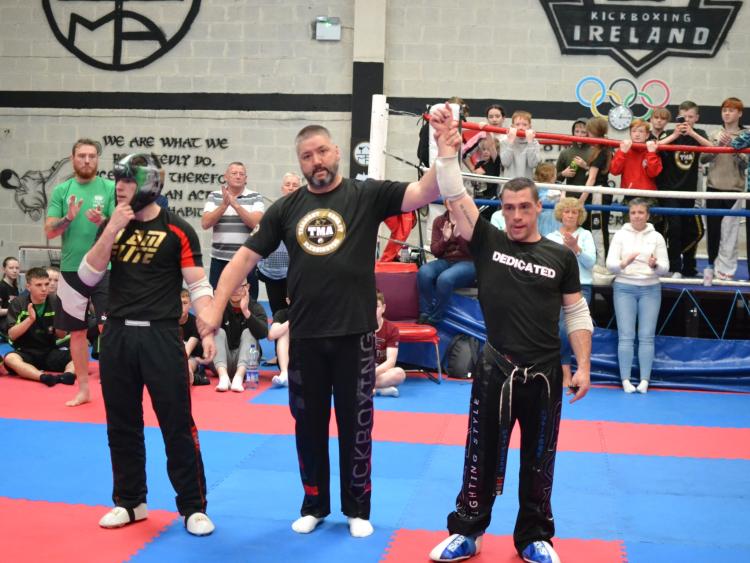 Jay has moved between the -63 Kg and -69 Kg sections over the years but it makes little difference to the results with the -69 Kg title being secured this time around.

In a carbon copy of the Kickboxing Ireland (KBI) Round 2 final from a month ago, it was the same opponent, Elite Fighter’s Jordan White, but the result was reversed with Jordan having won on that occasion in sudden death.

The two fighters being inseparable after the three rounds and extra time, drawn at 29 points each, sudden death was called and the first score taking the title.

Jordan White went for the blitz but Jay’s guile and experience told as he scored with a defensive side kick to take the title and qualify to represent Team Ireland in the upcoming World Association of Kickboxing Organisations (WAKO) world championships in Turkey in November.

The standing of this Edenderry resident on the World stage was evident afterwards as messages of congratulations flooded in from not only Ireland but from all over Europe and beyond.

The venue was Tallaght Martial Arts HQ and it was packed to the rafters for the fight, Jordan had the major support on the day but looking around it was not on club lines with kids from the same clubs shouting for different fighters. What a spectacle the two put on with chief Referee and Ireland Head Coach Dave Heffernan thanking both for a world class fight.

Jay was coached by BMA legend Ilija Salerno and fiance Claire Brennan with his father, John, and brother Arron never far away.

On the club scene, one of the up and coming fighters sustained a serious injury last week, Tyler Fetherston, fresh from his victory at the Combat Open, is wished a speedy recovery from everybody at the club and hoping to see him back in training soon.