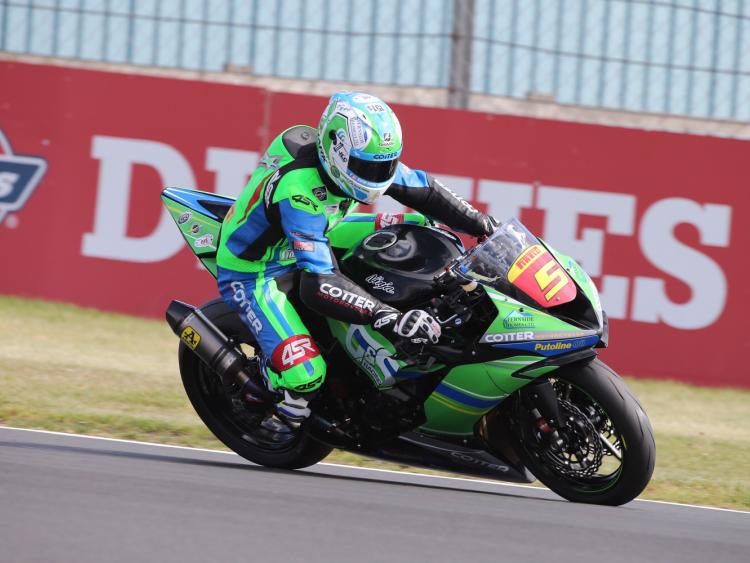 The Donnington Park National Circuit layout was used for the first time in quite a number of years, whereas the GP Circuit layout last year was one of Kevin Keyes’s best races with him taking second place and his first ever Superstock 600 podium.

The new track layout and the fact that Keyes was riding this year's newer Kawasaki was always going to be a challenge for him and his team G&S Racing, but they faced it head-on in the first free practice session just before lunchtime last Friday.

Entering pit lane on two occasions during the 25-minute session for adjustments to the bike set-up, Keyes went quicker each time he returned to track, eventually finishing that session in eighth place. The second free practice session was just a few hours later that afternoon, it was almost identical to the first with him entering pit lane twice again, and again improving his times when returning to track, but just losing eighth place to his teammate.

Qualifying on Saturday more or less followed the same pattern, Keyes’s team trying their best to find a set-up that would suit the young Edenderry man. His times improved yet again, by over one second a lap, but it was just enough to take back eighth position on the grid for Sunday’s 20-lap race.

Sunday's race started well for Kevin and after corners three and four, he was up to sixth place and getting into a battle with the three riders behind him. Over the remaining 19 laps, a great race ensued between Keyes and the following three with them all swapping places.

While this was happening, the leading group managed to open the gap between the two groups. Keyes finished out the race battling to get back to sixth, but unfortunately could only get to eighth, the position he had started.

After the race, Kevin Keyes told us: “This weekend we made more steps forward with the bike which was important and we have a direction to follow now to make it even better."

"I'm happy to have scored some points this weekend which is critical at this moment after missing out on some points at Oulton Park."

"I just want to thank all my team at G&S Racing Kawasaki who worked so hard all weekend. Also to all my sponsors who make it possible for me to ride."