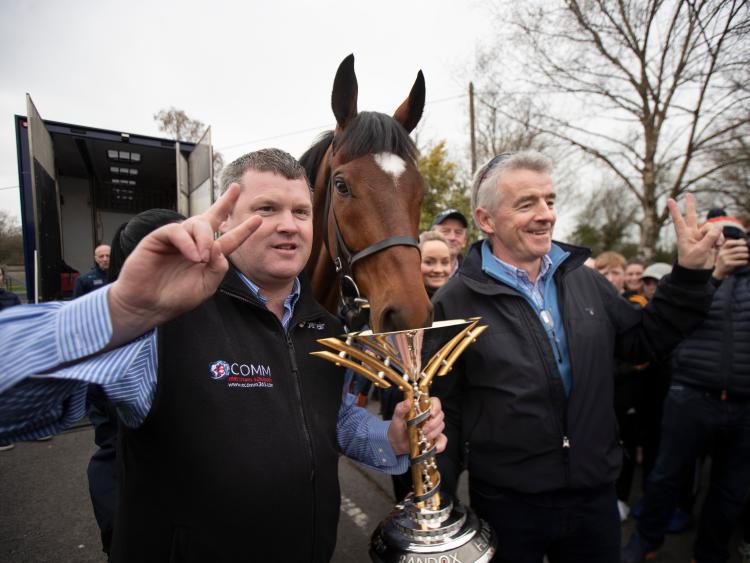 Back-to-back Aintree Grand National winner Tiger Roll will make the trip from Meath to Westmeath as he parades at Killbeggan Races on Friday evening next, May 17.

Tiger Roll has now won just under €1.45 million. If he runs and wins the Grand National next year, he will be deemed the greatest Aintree Grand National winner ever, ahead of Red Rum.

It’s something the racing world and general public would pay to see. In 2007 Gordon Elliott (29 y/o) was setting out on his career as a trainer with a brand-new licence, but little did he know that that he would have his first ever winner in the Aintree Grand National when Silver Birch was successful at 33/1.

Just a month later on May 5, 2007 he had his first Irish winner at Kilbeggan with Toran Road (5/1) ridden by his brother Joey for the now famous Barstool Prophets Syndicate.

What mightn’t be known is that Tiger Roll won a novice chase at Michael O’Leary’s local course, Kilbeggan in 2016. On June 20, 2016, Tiger Roll, in the middle of four Cheltenham wins, ridden by Jack Kennedy, won a conditional novice chase by 3 ½ lengths and coincidentally, beating two previous novice chase winners, the Willie Mullins trained Valyssa Monterg and Jessica Harrington’s Duckweed, the same trainers who were placed in this year’s Grand National.

This is a great opportunity to meet a true champion and legend and racegoers hoping to catch a glimpse of him are urged to come early.

The feature race is the Belvedere House, Gardens & Park Handicap Steeplechase of €20,000 is sponsored by Westmeath County Council and in addition Wright Windows of Milltownpass, Westmeath are celebrating their 50th anniversary in business this year with the sponsorship of The Wright Windows 50th Anniversary Celebration Beginners Steeplechase.

Paddy Dunican Managing Director said: “We are delighted that Westmeath County Council are sponsoring our feature race, the Belvedere House, Gardens & Park Handicap Steeplechase. We are thrilled that Michael O’Leary of Gigginstown House will have Tiger Roll, the dual winner of the greatest race in the world, parading at our race meeting."

The former National Hunt senior handicapper Noel O’Brien will be remembered at Kilbeggan on Friday evening, the race in his honour will be called The Noel O’Brien Memorial Novice Hurdle. He contributed very much to improvements in Irish Racing. Kilbeggan is hosting a Tote day on Friday which means any tote account customer can contact the Tote to claim a free pair of tickets to attend next Friday’s meeting at Kilbeggan.

"The May races in Kilbeggan was traditionally a great occasion with local people travelling home from Britain and from all over Ireland. It’s the proper start of the summer racing over hurdles and fences, as we build up to the Galway races. It is a great opportunity to see a racing champion in Tiger Roll, so arrive early and remember the first race is at 5.10pm," Paddy said.