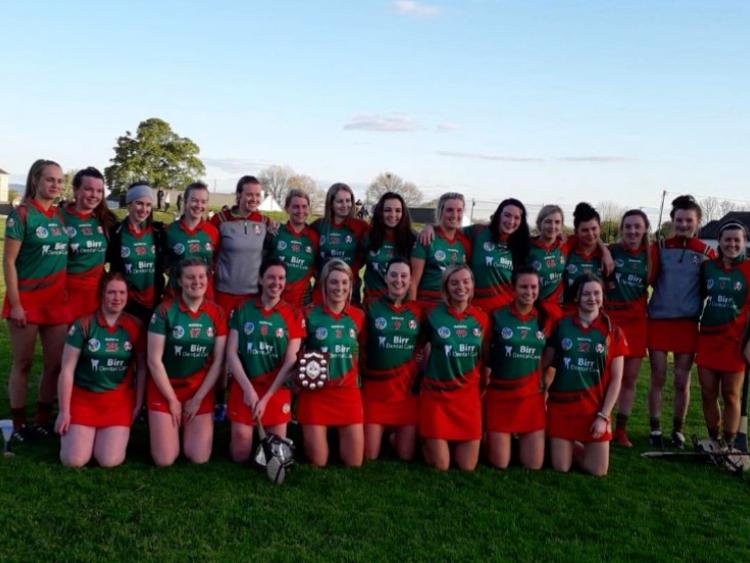 Birr were crowned the Rudds of Birr Division 1 camogie league champions in an exciting game in Drumcullen last Saturday evening following a five-point win over defending champions St.Cillians. Goals win games is the old cliche and this was certainly the case for Birr who made their goal chances count when they needed them the most.

The game was helter-skelter from the throw in with midfielder and captain Niamh Killeen pointing in the opening minutes of the game. One particular aspect of the game that St. Cillians will be regretting is the number of frees they gave away as Birr's Orlagh Kirwan was deadly accurate on placed balls.

In a replay of the first round of the league where St. Cillians defeated Birr by three points, the tables turned in favour of Birr second time around. Kirwan pointed her first free of the game to make the side level after just four minutes. Moments later Kirwan was awarded a free 60 yards from goal, this free dropped short into the danger area where full forward Sarah Harding deflected the shot into the net to give Birr their first lead of the game.

This goal was a key moment as St. Cillians struggled to close this gap throughout the game. This point was followed up with a Dawn Whelahan point as the corner forward caught the ball all alone in the air all to raise the white flag. Aisling Brennan did her utmost to keep her side in the game and always looked dangerous when the centre forward had the ball. Brennan scored her first point of the game from a placed ball and seconds later had her second point of the game when she pointed with his from 60 yards from a Megan King pass.

Kirwan continued her deadly accurate strike with another free to make it 13- to 0-3 with 10 minutes played. Ciara Ryan had a huge presence at centre forward, while Caoimhe Dunne, Mairead Jennings and Deirdre Cashen also impressed for Birr.

Corner forward Eimear Mooney added another point for her side when she broke onto a loose ball which fell from a cluster of players to keep Birr ahead. For St.Cillians Aisling Brennan had a tremendous game at centre forward while Shiofra Ryan also stood out keeping Sarah Harding to just 1-2. St. Cillians relied heavily on Aisling Brennan to score as the number 11 scored 9 points from play and placed balls.

Elizabeth Harding also tried hard in the forward line as she set up Aisling Brennan for a point and followed this point up with a point of her own. The first penalty of the game came when Eimear Mooney broke through into and made a beeline for the net however she was pulled back resulting in a penalty for Birr.

Full forward Sarah Harding stepped up to take the penalty however her shot was saved by full back Shiofra Ryan and Kirwan with no doubt pointed the resulting 45. St. CIllians back's were against the wall as Birr edged ahead. St. Cillians pushed hard for a goal however this was testament to the Birr defence who protected their goal with numbers to prevent a St. Cillians goal.

One of the scores that could be considered score of the game was Aisling Brennan's 70 yard free, with ease the number 11 dropped the ball in the middle of the field and put the ball over the bar effortlessly.

Points were exchanged between Sarah Harding and Cailin Fitzgerald while Aisling Brennan added her fourth point of the game. Sarah Harding again looked dangerous in front of the goal however this shot was stopped on the line by Kate Moran and rolled out of play for Orlagh Kirwan to add another point to her tally.

A turning point came in the game when Gillian Irwin was forced off with injury however her replacement Ellen Regan immediately made an impact scoring her sides second goal of the game just before the half-time whistle giving Birr a comfortable four-point lead.

St. Cillians returned to the field the sharper team of the two with Aisling Brennan scoring four points without answer levelling the sides once again. The game was in the melting pot however Birr kept their composure with Orlagh Kirwan and Ellen Regan pointing.

Darra Hanamy scored a point of her own when a fine Aisling Brennan sideline landed in front of the fall forward and the number 14 pointed. Orlagh Kirwan added another point from play however St. Cillians kept goalkeeper Mairead Jennings busy in the closing stages of the game.

The score of the game came in the final ten minutes when Sarah Harding lost her hurl ten yards from the goal, the number 14 kicked the ball past a Birr defender and managed to kick the ball over the bar while falling at almost an impossible angle. This score was followed up by a finely taken Ellen Regan point.

One last attack from St. Cillians resulted in a penalty where Aisling Brennan's rasper of a shot hit the crossbar however Birr were quick off the mark to clear the ball to the opposite end of the field for Kieran Dooley to blow for the full-time whistle and Birr to win their second league title.