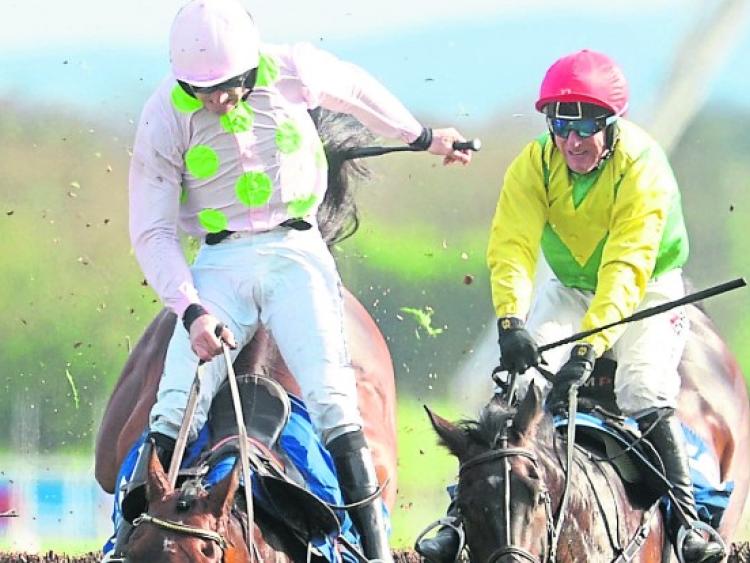 Punchestown Tips: The horses to back on Ladies Day at Punchestown 2019

15:40 - Peter Maher targets this race and he won it last year with Alpha Male. He runs three in it this year but it is significant that Patrick Mullins has been booked to ride CHANGE YOUR STORY (7/2). Looking at his last run, 57 lengths last to Burning Ambition at Down Royal, doesn't inspire confidence but significantly he won here on his previous start. He accounted for Cagliostro and Enniskillen that day in February and would have been laid out for this.

16:20 - HARDLINE (6/1) remains with huge potential over fences despite a pretty major blowout in the Arkle at Cheltenham. He came in for significant support in the ring that day but finished fully 37 lengths behind the winner, Duc Des Genievres. A seven-pound claimer has been booked by Gordon Elliott here to counter his hefty weight and he could get his head in front if recapturing his early season form. He put subsequent Arkle and Aintree runner-up Us And Them to the sword by 10 lengths at Navan last December and beat Getabird over Christmas. He also has course form here, finishing runner-up to Voix Du Reve in November, ahead of subsequent Aintree winner Cadmium who was third.

16:55 - MOYHENNA makes most appeal here after a facile 25-length victory at Limerick in March. He had made a pleasing chase debut last December, finishing a six-length runner-up to Camelia De Cotte. He ran into another decent one in the shape of Pravalaguna next time out, again finishing a game second but from there things unravelled. He fell at Fairyhouse in February and unseated his rider at Thurles three weeks later. He regained his composure for that Limerick success, his first win over fences. It was impressive and he makes huge appeal now going handicapping.

17:30 - APPLE'S JADE (3/1) has had her problems since conquering all before her in 2017, culminating in a mare's hurdle win at Cheltenham that year. She was twice beaten by Benie Des Dieux in an uninspiring 2018 but had returned to form in exquisite fashion this term, twice beating subsequent Aintree Hurdle winner Supasundae by a cumulative 36 lengths. She bombed out and finished 30 lengths behind winner Espoir D'Allen in the Champion Hurdle at Cheltenham, and failed to retrieve her reputation when going down to If The Cap Fits at Aintree a few weeks later. Despite that, it's hard to ignore her at the odds considering the woes of current favourite Buveur D'Air this season and the fact that she's beaten the other market principal Supasundae so comprehensively on two recent outings.

18:05 - This looks like City Island's to lose after his success in the Ballymore at Cheltenham but I am not writing off BATTLEOVERDOYEN (11/2) just yet. I was a big fan of his in the lead-up to Cheltenham where he was contesting favourite status in the same race but he never looked comfortable that day and faded rapidly after the fourth last. Punchestown as a track suits him better as he showed when landing a flat race here on debut for Gordon Elliott last year. He took to hurdles with relish after that, winning a maiden hurdle at the first attempt by 13 lengths at Navan before claiming victory in a Grade 1 at Naas prior to Cheltenham. Back on home soil, I can see him striking under a prominent ride from Jack Kennedy and denying City Island a follow-up victory.

18:40 - It's impossible to ignore how impressive CAID DU BERLAIS (6/1) was in winning this race last year. He jumped brilliantly and went away to slay his rivals by 21 lengths. His one run since was in the Cheltenham equivalent where he pulled up. While that isn't ideal, his course form is undeniable and he's so lightly raced and fresh, that exertion is unlikely to have taken too much out of him. He will face stiff opposition from the likes of Ucello Conti and Stand Up And Fight who were competitive at Cheltenham but he still gets the nod nonetheless.

19:10 - I've been following DUNVEGAN (10/1) since he won the Kildare Post Flat Race at Punchestown last year with mixed results it must be said. He raced keenly on his next start, which came at Fairyhouse in December 2018, but he managed to produce enough to win. He was outclassed by Commander of Fleet on his next start and equally in defeat to City Island at Cheltenham where he was pulled up. However, he has been crying out for this minimum trip and given the manner of his Fairyhouse win, a prominent ride from Davy Russell could produce the goods.

19:45 - COUER SEREIN (14/1) would have to be a decent animal to win on his debut but the five-year-old gelding by Fame and Glory was a relatively expensive purchase. He also runs in the same colours carried to victory by Canardier in this very race two years ago. He's well capable of springing a surprise on his racecourse debut in a wide-open race.

DAILY DOUBLE: Hardline and Apple's Jade Both To Win - 25/1