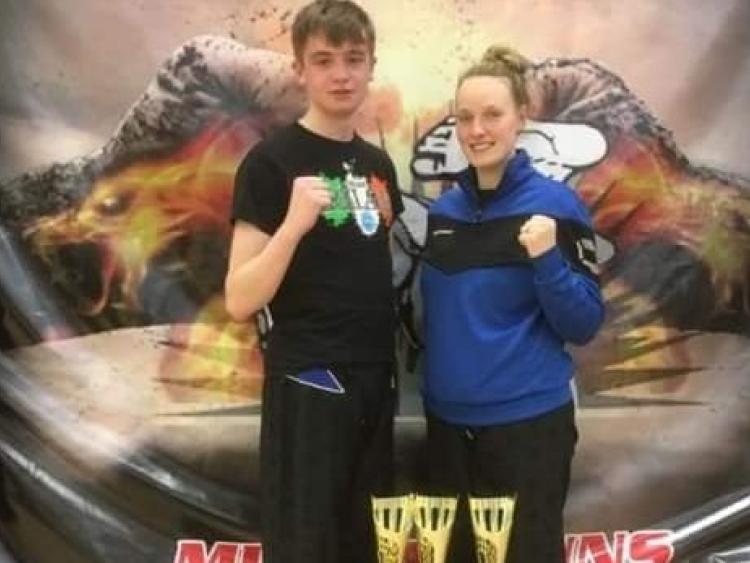 Edenderry fighters pick up more success on the road

Brandon Tait fought in the Foyle Arena in Derry on Saturday and the The Buffers Alley community Arena in Wexford on Sunday; Nathan Tait, Luke McCann and Jay Daniels travelled to Innsbruck and achieved podium finished at the Austrian Classics World Cup event.

On Saturday Brandon and Claire Brennan travelled to the “Battle of the North” run by Michael Bradley of the Mickey Finns Club in Derry, it was a fantastic day on the mats with Brandon taking the Senior Men’s -70 Kg title plus the prestigious Senior Open Weight Grand Champion section as well. This title was won by Jay Daniels last year so it's good to see the small North Offaly Club continuing its success here.

Claire Brennan also won the Senior Ladies -70 Kg Title again retaining the title she won last year with the small addition of twins Kayden and Kenzie in the intervening 12 months. Fast forward to Richie Byrne’s B-Elite Open in Wexford on Sunday and another early start for Brandon but the same result with a victory in the Senior Male -70 Kg Title but went down to Matas Rancas of BMA in the final of the Open Weight Grand Champion. Abigail Farrell made the long trip as well with silver medals in the Musical Forms and Point Fighting while Matilda Ferriday fought her heart out but missed a podium place this time around.

Darren Tait deserves a mention here, father of Brandon, Nathan and Mason. He did the early morning run to the airport on Friday to drop off Nathan, another early start on Saturday to referee all day in Derry as head WAKO referee, home on Saturday and another early trip on Sunday to Wexford to referee again all day.

What a weekend in The Olympiastrasse in Innsbruck for the “Austrian Classics” with success for the club on both days. Luke McCann was magnificent in Point Fighting on Saturday and was truly World Class, reeling off five victories on his way to the Older Cadet(U16) -57 Kg title beating German, Russian, Italian and Scottish fighters before taking the gold with victory over the home favourite Eric Zimmerman by 19 points to 14.

In the next age group up Junior (U19) Luke fought his way to the final beating two German and a Hungarian on the way only to lose out to Dominic Loos also from Hungary by 19 points to 15. Luke also captured the Junior Kick Light -57 Kg title on Sunday beating Spanish and Ukrainian fighters on the way to the final where he beat Nicolo Tumolo of Italy in a close final on a split decision 2 to 1.

Jay Daniels also had a return to form here with silver in the -69 Kg Senior section beating fighters from Great Britain, Italy and Germany before losing out to Enrique Letona of the USA in the final. In the -74Kg section Jay had wins over Germany and Elijah Everill of the US All-Stars before going down to Ukraine’s Paulo Zamyatin in the semi-final, Paulo went on to win the section.

Jay also made his competitive Kick Light debut but went out in the early stages to an Italian fighter. Nathan Tait had a quiet weekend by his standards but put in some great performances. Nathan made the highlights video of the event with his stunning sweep of Ohran Cebe of Switzerland in his 9 - 6 victory in the 1st round of the Senior -63 Kg section.

It was a big weekend for current World Champion Jordan Doran celebrating her 18th birthday with a party in Carbury GAA with her family and friends. Saibh Kelly also started her recovery from a recent knee injury and all at the club wish her a speedy return. This weekend sees a trip to Cork for the Munster Open followed by another international trip to Germany next weekend for the “Heroes of Hamburg” tournament with Jay, Claire, Luke, Nathan and Jordan signing up for this one.