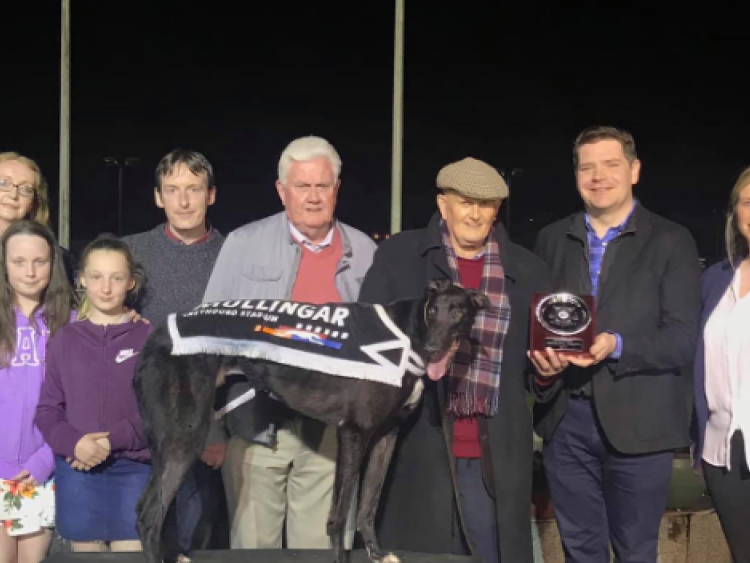 Offaly and Rhode legend, Paddy McCormack, found himself among the winners as his dog, Fahy Cain, won on the undercard of the Cesarewitch meeting at Mullingar last weekend.

The Iron Man from Rhode Paddy McCormack has a real star on his hands in the shape of Fahy Cain who was most impressive winning the final of the April Unraced Novice stake in 29.76. Paddy was on hand himself to collect the trophy after the race from local TD Peter Burke.

Elsewhere, Beaming Paradise produced a scintillating performance when he easily landed heat three of the Larry Clancy Memorial Irish Cesarewitch in the fastest time of the first round, 33.36.

Holland’s Macroon Cruz was sent off the 5/4 favourite in the opening heat and he was made work hard for the victory. Breaking smartly from trap one he led round the opening two bends by two lengths from Make Merry and Vaguely Noble. As they reached the third bend it appeared as though Vaguely Noble was about to take over but a game Macroon Cruz held the inside line forcing Vaguely to check slightly. This allowed Make Merry up the inside and although Merry tried valiantly he couldn’t pull back Macaroon Cruz who held on by a short head from Making Merry with Vaguely Noble a half-length back in third in a decent 33.71 time.

In heat two Budders Spot was quickest away and he led on the run-up to the corner with Dromrich Altair closing on his outside with recent Irish Sprint cup finalist Boleys Fella on the heels of the leaders. Rounding the opening two bends Dromrich Altair took control and lead down to the third bend by a length from Budders Spot with Boleys Fella making eye-catching ground back in third.

As they turned for home Dromrich was entering uncharted waters as he’d never been over this distance and in the last fifty yard he was collared by Boleys Fella who got up to win in 33.87 by a length with Budders Spot back in third.

Pudgie Budgie was quickly into stride in heat four and looked like he had opened an unassailable lead down the back straight as the rest of the field were tightly packed. Rounding the home bend it appeared as Pudgie slightly stumbled and here Reggie Roberts Urban Time quickly took over and went on to land the spoils in 33.88 with both Mean Beauty and Farran Bourbon staying on best to qualify from an impossible position down the back straight and both of these are sure to improve for the run next week.

In the final heat of the night, local owner Joe Quirke's Bective Zita created a bit of a surprise when she stayed on best to win in 33.56. Breaking well from four she was joined on the inside to the opening bends by Lady Bren with the favourite Totos Park close up in third with the slow-starting favourite Skywalker Logan back in fifth. Stretching away down the back straight Bective was game in front and was not for passing and she raced on to win by four lengths from Totos Park with early pacer Lady Bren back in third.

Catch more on the greyhound and horse racing front from Vinny Grennan over on his dedicated Facebook page.