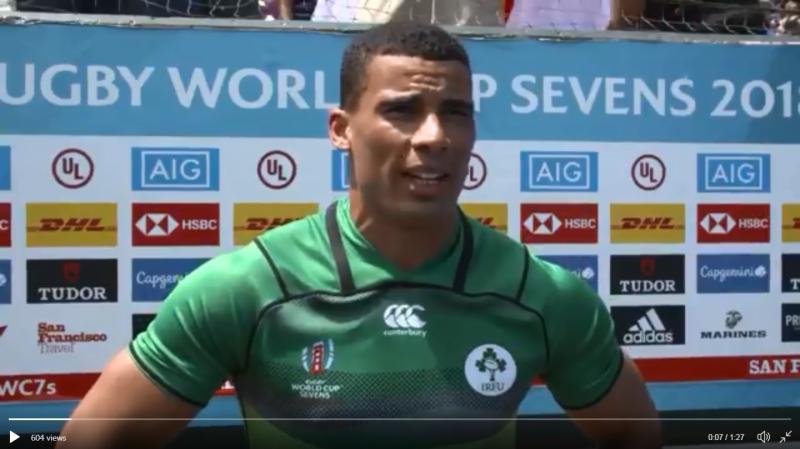 Offaly flyer Jordan Conroy has been named on the Ireland Men’s 7s squad to compete at the World Rugby Sevens Series Qualifier at the Hong Kong 7s this weekend. It will be the Buccanners' players first time to play in Hong Kong.

He established himself as a key part of the Ireland 7s team in 2018 with some superb performances and some amazing tries.

Eight of the players named in the squad competed at last year’s competition, where Ireland were knocked-out at the Semi-Final stage to eventual winners Japan. The winner of the tournament will gain a place on next season’s World Rugby Sevens Series.

In Hong Kong for the first time along with Jordan Conroy are Adam Leavy, Mick McGrath and Greg O’Shea.

Ireland are drawn in Pool F in with Russia, Uruguay and Jamaica. They face Jamaica and Uruguay in their opening pool games on Friday, April 5and then face Russia on Saturday, with the first round of knock-out games take place that evening.

The Semi-Finals and Final take place on Sunday.

Ahead of the side departing for Hong Kong, Anthony Eddy said, “There have been many learnings since last year’s Hong Kong experience, with some very positive moments for the team. They players have been exposed to a high level of competition and have tasted success during the year.

"Competing at the World Series events in London and Paris, winning Rugby Europe and doing well at the Rugby World Cup, while also claiming the Dubai Invitational title has helped the players grow in confidence, as well as developing their skills by playing against the top sides in the world.

"The Hong Kong Qualifier is a tough, winner takes all competition, and having experienced last year’s tournament, everyone involved is focused on the performance that is required for six games and claiming a position on next season’s World Series.”