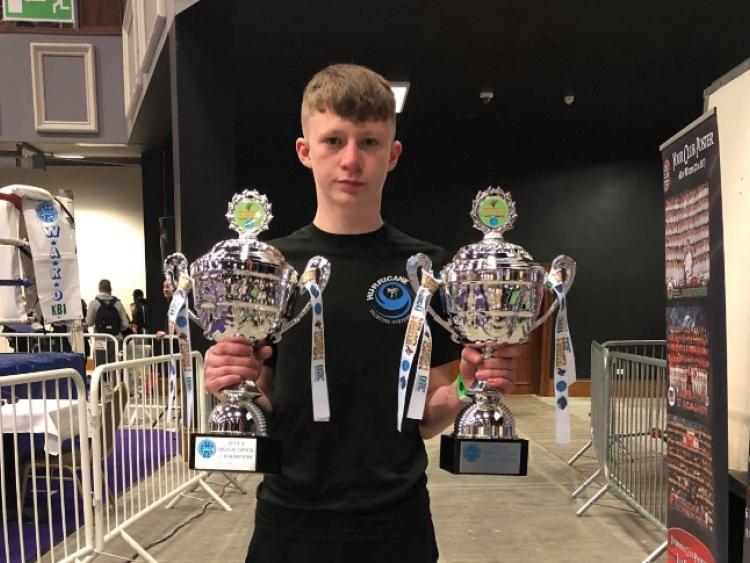 Luke McCann of Edenderry’s Team Hurricane, hit a hat trick of titles at the Irish Open in CityWest last week.

The Irish Open is the biggest and best fighting tournament in the world and with almost 2,000 competitors from 35 nations and 296 clubs taking their chance at success.

The event attracts some of the best fighters and coaches in the world with numerous individual champions attending. Those interested can watch a highlights package on Eir Sports tonight, Tuesday, March 19 at 7pm.

15-year-old Luke McCann, a Carbury native fighting out of the Edenderry-based Team Hurricane gym, was one of the star performers in 2019.

The Oaklands Colleges students turned up in excellent form and walked away with three trophies.

Having claimed numerous titles already in 2019, Luke took to the mats in Dublin to claim two titles on day one.

Luke stepped up to senior on Saturday but Friday's exertions had taken its toll plus a toe injury was impacting his movement and he lost heavily to current world champion Grigory Langavy from CSKA Moscow. Needless to say Grigory went on to win the section at ease.

Luke also had an outing in the Junior -57 Kg Point Fighting on Saturday but lost in the second round to Hungarian Dominic
Loos who won out the event with style.

Onto Sunday and with a relative rest day on Saturday the refreshed Luke took the Older Cadet -57 Kg Point Fighting title in style winning six fights in a row, beating GB, Norway, Italy and Hungary to advance to the semi-final where he had a tough fight against Dylan McClelland of Tallaght.

Andrew Aviles from the USA beat Dominik Loos in the other semi-final to set up a titanic battle for the coveted title.

From the outset Luke was by far the superior fighter and took victory on a 9-2 scoreline, making a little bit of history for Team Hurricane and Edenderry in the process.

The final capped 40 rounds of fighting over three days for this supreme athlete who claimed 17 wins from 19 fights.

There were medals elsewhere for Team Hurricane throughout the weekend with Jay Daniels taking a bronze medal with Team Barrus (Italy) in the senior Team Event, Nathan Tait taking bronze in the Junior -63 Kg Point Fighting, Sarah Abourezk winning bronze in -37 Kg Point Fighting and Alex Keyes recording three victories, only to lose out in the final of the -32 Kg Point Fighting.