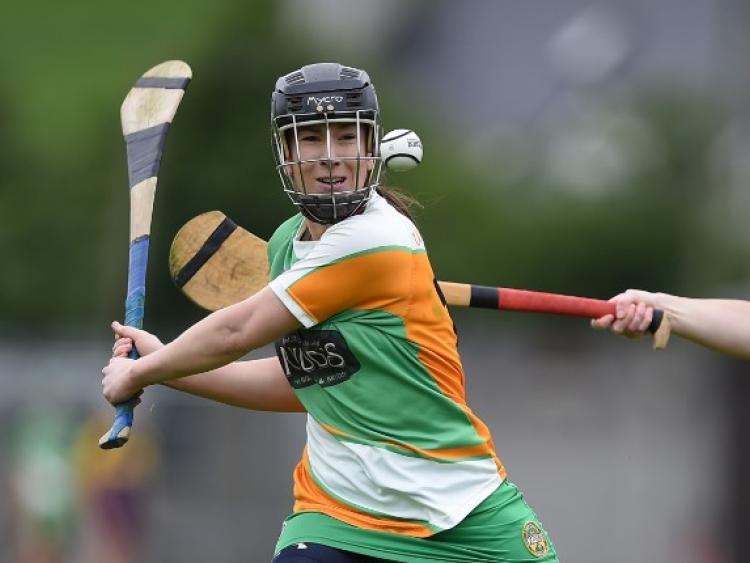 Arlene Watkins who was in scoring form for Offaly

OFFALY maintained their position in the top tier of the Littlewoods Ireland Camogie League as a result of their 4-15 to 1-6 romp over Wexford at Manguard Plus Hawkfield in Newbridge.

Barry Kennedy came in for his first game as Wexford manager and the Buffers Alley man was left in little doubt about the extent of the job at his hands, although he will have been pleased with the character shown by a number of players in the second half, who should improve considerably now that a training regime is in place.

Offaly have had some good performances throughout the group phase without being able to get over the line and were hot favourites to maintain their Division 1 status, something they achieved in clinical fashion.

Mike Wall’s troops had a considerable wind aiding their efforts in the first half and they certainly capitalised on it, going in at the interval with a 15-point lead, thanks to a brace of goals from Christine Cleary.

Cleary was a constant threat and already had a point on the board when drilling her first goal after four minutes and she quickly followed up with another neat point as Offaly established an early five-point advantage.

Arlene Watkins was another Faithful forward enjoying the freedom of the park, the Birr sharpshooter firing four points, and when Cleary rewarded the good work of the influential Mairéad Teehan and Elizabeth Harding with her second major after 21 minutes, that left it 2-11 to 0-2 at the interval.

With the elements helping, Wexford were more competitive in the second half. Mags Byrne scored a goal and star attacker Chloe Foxe marked her welcome return to the fray following her involvement with All-Ireland Senior Club Championship runners-up St Martin’s by scoring four points, but even as they made changes, Offaly maintained their threat.

Teehan billowed the net from a penalty before Watkins registered the goal her brilliance deserved and it was a cruise for Offaly, who will now look to the All-Ireland Championship in a positive frame of mind.

For their part, Wexford will be glad to leave the National League in the rear view mirror and with a permanent management structure in place, will be targeting a summer of redemption.