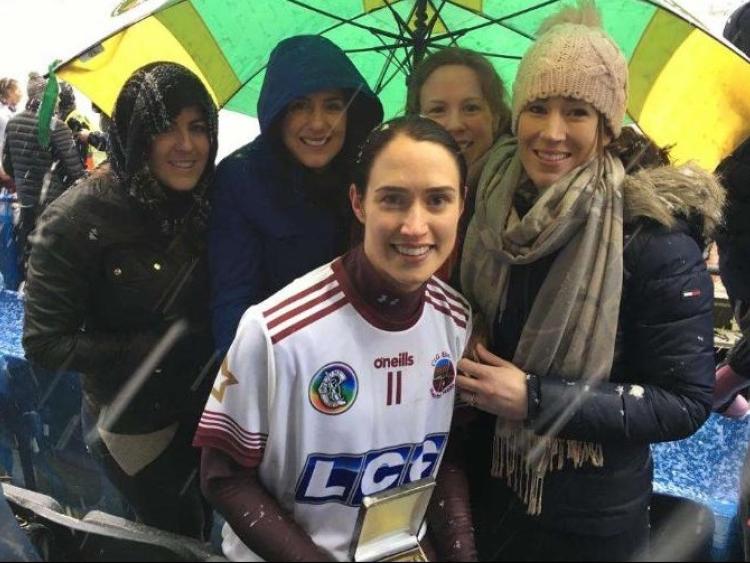 She may have been player of the match for a second year in a row but a shivering Tina Hannon, glad to have escaped the heavy snowfall outside, quite rightly emphasised the collective culture as Slaughtneil of Derry claimed a famous third AIB All-Ireland Senior Camogie title in succession and sealed a stunning Ulster double, after Down side Clonduff’s earlier Intermediate success.

She was joined by a large Offaly contingent in Croke Park, including friends, family and Faithful players Katie Bergin, Marion Crean, Shelia Sullivan and Arlene Watkins.

A former All-Star nominee during a fantastic career with Offaly that yielded All-Irelands at Junior and Intermediate level, the first of those a decade ago, Hannon is now firmly ensconced up north and although not involved in Slaughtneil’s first triumph, has been a key cog of all that has happened since.

“When you’re in the Final you just want to perform to the best you can” said a beaming Hannon. “We have such big leaders on the team and when you combine that with the young talent we’ve coming through, to go out and play like that today, we’re just delighted to be All-Ireland champions for the third year in a row. 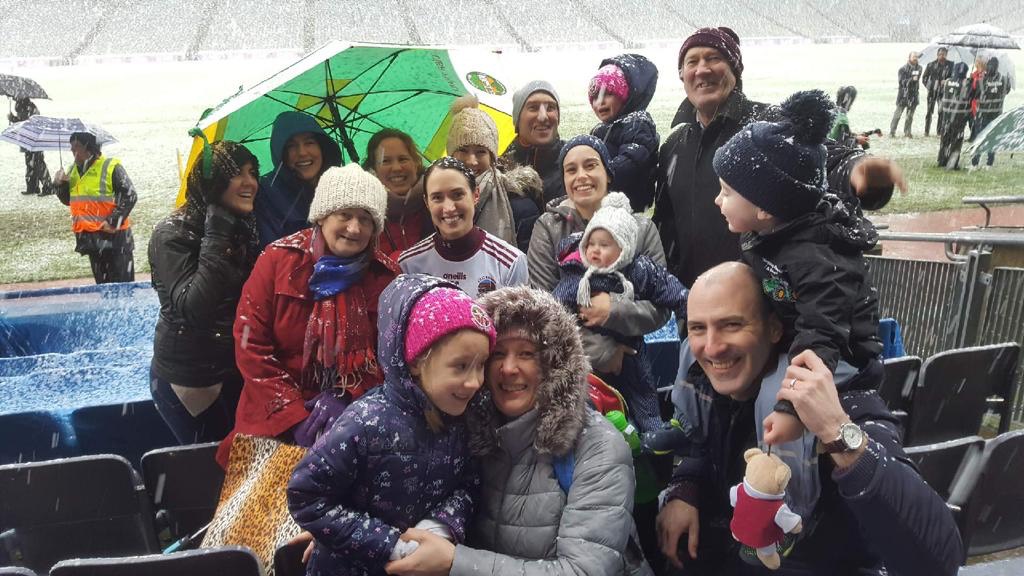 PICTURED: Tina pictured with members of her family in a snow-covered Croke Park

“Before the game, we were just talking about winning an All-Ireland. We didn’t want to put too much emphasis on the fact we were going for a three-in-a-row, but now, that it’s being said, it’s unbelievable really.

“During the year we played Kilkenny in a practice match and Ann Downey (the Kilkenny manager who was part of the St Paul’s team that completed the three-in-a-row twice) spoke to us after and made us realise some great teams had won three-in-a-row. We had (Kilkenny hurling manager) Brian Cody speaking to us earlier in the year too.

“It’s kind of surreal to think that you’re placed among them great teams now and we’re so, so honoured.

“But that’s what’s so special about the Club Championship. A lot of the time, it’s not clubs from the county powerhouses.

“We were in control for most of the game. Louise (Dougan) dropped back as sweeper because we knew their half-forward line was exceptionally strong. We’d seen that from their Semi-Final and Leinster Final and as usual, Louise is just so brilliant at that role. There’s not too many can play the role as she can.

“We pushed on from there once we got the lead. And when you have conditions like that, a lead is so important.”

The entire first half was played in teeming rain that transformed to sleet and then snow in the second half.

Hannon ended with a tally of 1-7 but her fourth minute goal was probably crucial in the context of establishing early dominance and in truth Slaughtneil never looked like being overhauled.

Josie McMullan, Hannon and Shannon Graham were on target as they established a 1-6 to 0-3 interval lead and early points by Hannon and Aoife Ní Chaiside from the restart extinguished St Martin’s hopes.

To give JJ Doyle’s side credit, they never gave up but Jolene Bradley saved Emma Codd’s 47th minute penalty.

Slaughtneil were happy to sit back on their big lead and though Linda Bolger, Chloe Foxe (free) and Lettie Whelan hit the last three points, an astonishing comeback was never on the cards.