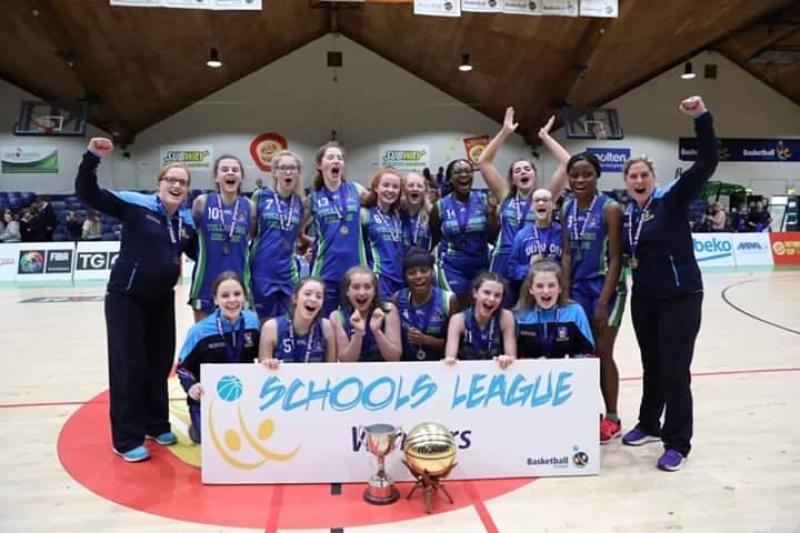 U16 B Girls All Ireland Schools League Final

Tullamore College were crowned U16 B Girls All Ireland Schools League champions in the National Basketball Arena in Tallght on Thursday afternoon 28th February, thanks to a 61-51 point win over St Mary’s of Midleton in the final.

What a birthday present this title was for Meadhbh O’Brien who put on an exhibition for Tullamore at point guard scoring 19 points having just celebrated her 16th birthday earlier in the week. Tullamore College has many stars on the day including an MVP display from Emma Glavin whose long range shooting was poetry in motion throughout while another 17 points from her twin sister Ellie proved decisive for the Tullamore outfit.

A close and hard-fought opening quarter, saw a nervous start until a long three point shot form Mia O’Mahoney settled the nerves to see Tullamore with a slender 10-11 lead going into the second quarter.

Tullamore upped the ante in the second, with both Glavins putting in superb displays, while Meadhbh O’Brien began to rain scores in. Tullamore College led 32-26 going in at the half time break. Hannah Dooley gave valuable minutes in this quarter also. 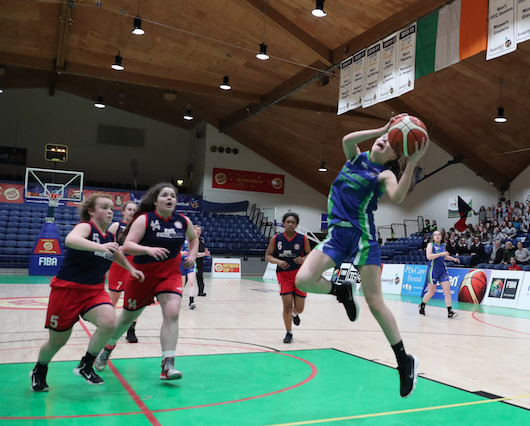 Ellie Glavin drives to the basket

Tullamore stretched their lead out in the early part of the third quarter, with O’Brien again to the fore for her side, along with good scores from Jean Carson who dominated the rebounds for the Tullamore side. A late surge from Midleton saw them begin to chip away at the lead, but Tullamore held a 48-36 point lead going into the last. Meadhbh took a heavy fall which could have proven disastrous for the girls in blue and green but fortunately Lauren Martin came in to give Meadhbh a rest and a chance to recharge the batteries for the final assault on victory in the fourth quarter.

St Mary’s kept the pressure up in the fourth, with some big scores helping them to close the gap back down, but again, it was the Glavins and O’Brien who stood firm under pressure, to see them home to a memorable ten point victory in the end. Congratulations to the team, the school and teachers Karen Brady and Aine Brady. This completes a remarkable rise for the Tullamore College school from D level four years ago to A level next year.

An interesting footnote is that the last Tullamore school to win this U-16 Cup title was the all conquering SHS Tullamore side of 1996 led by future stars Susan Moran and Orla Dempsey.