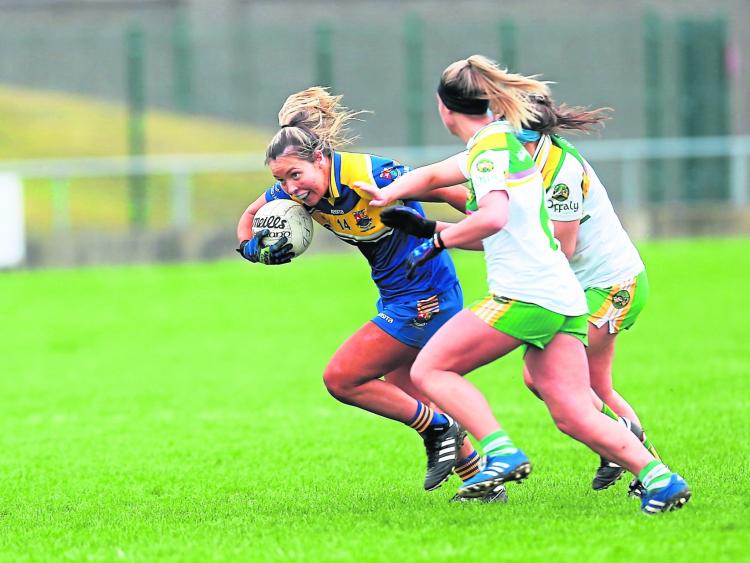 A point from Michelle Farrell in the 60th minute for Longford denied Offaly a victory and earned the visitors a draw in the Ladies Football National League Division 3 game in Birr on Saturday last, February 23.

Nearly 10 minutes of stoppage time was played with both sides having enough possession and chances to claim the win but they had to settle for a share of the spoils. Mairead Daly was the stand-out performer for Offaly, scoring 2-7 of Offaly's 2-11 total.

Longford had to play over 40 minutes with 14 players after Leanne Keegan was sent-off in the 21st minute. Keegan had been pulled for an innocuous foul and vented her frustrations with referee Niall McCormack who then showed her a red card.

Aided by a strong wind, Offaly went in at half-time with a three-point lead, 1-7 to 1-4. They opened the scoring in the third minute with a pointed free from Mairead Daly who had eight opportunities from frees all within the 20-metre line and kicked over seven.

Longford got their first goal in the 5th minute following a move involving Aisling Greene and Ciara Healy with Emer Heaney finishing the ball to the net.

Two minutes later Offaly got their first goal through Daly following a sideline ball. Longford then kicked two frees wide and rushed their passes and kicks. Both sides were reduced to 14 in the 15th minute when Maria Kelly and Michelle Noonan were sin-binned. In the 16th minute, Offaly were three ahead.

Aisling Greene and Ciara Healy kicked over nice points to cut the gap to the minimum of margins by the 19th minute before they were dealt a blow with Keegan’s sending off. Mairead Daly and Michelle Farrell were on target from frees before Offaly kicked over two points to hold a three-point lead at the break.

Longford turned that deficit into a two-point lead by the fourth minute of the second half with two pointed frees from Michelle Farrell and a well-taken goal from Aisling Greene. Greene could have scored a goal before that but the referee failed to play advantage and called back for the free.

Offaly were level in the 41st minute but a minute later Clare Farrell set up Greene for her second goal and Longford’s third. The lead didn’t last long and Offaly got a goal minutes later.

Aisling Greene edged Longford ahead with a point in the 47th minute but a point from Roisin Ennis and another Mairead Daly free gave Offaly the lead by the 52nd minute.

Aoife Carey shot wide minutes later before a nice point from Michelle Farrell levelled matters for Longford and despite the lengthy stoppage time, neither side could get a winning score.