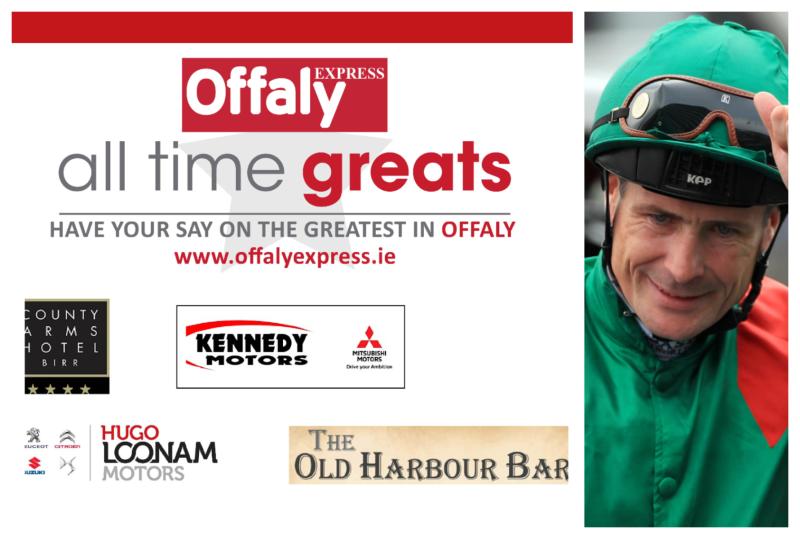 After almost a month of voting, 16 contenders and three rounds of voting, Offaly's greatest ever jockey, Pat Smullen, has emerged as the winner of the Offaly All Time Greats series.

In the intervening weeks, we tasked you the Offaly public with voting in a series of matches from a last 16 stage right through to the final, and you voted in your thousands.

In a fiercely contested final against Offaly hurler and multiple All-Ireland winner Brian Whelahan, you could say Pat edged it at the line as he has so often done during his illustrious riding career. He won 50.2% of the final vote to Brian Whelahan's 49.8%.

Rhode man Smullen is a nine-time Irish champion flat jockey, one of the most successful of all-time. He began his career in racing as a young apprentice with Joanna Morgan, before going on to forge a formidable partnership as retained rider with Curragh-based trainer Dermot Weld.

Pat drew support from across the world during the voting process, including from Joanna Morgan on Twitter, from fellow jockeys in Ireland, the UK, Switzerland and America, as well as from ITV racing presenter, Sally Ann Grassick and Horse Racing Ireland on Twitter.

As one of the country's most successful jockeys, Smullen has achieved success all over the world, from the 2,000 Guineas in Britain to the Breeders' Cup Marathon in the United States. He is also a dual Irish and Epsom Derby winner, a feat he achieved in the same season in 2016 aboard the Dermot Weld-trained Harzand.

In 2018, Pat was forced into an indefinite break from the sport after a pancreatic cancer diagnosis, which he continues to fight following surgery. He received his first post-op chemotherapy just last week, remaining in good spirits and dedicated to racing in the process.

Grateful to be getting the first treatment of my post op session of chemo! pic.twitter.com/ymu9RTgnuU

He has now been recognised for his sporting and personal perseverance as 'Offaly's All Time Great.'