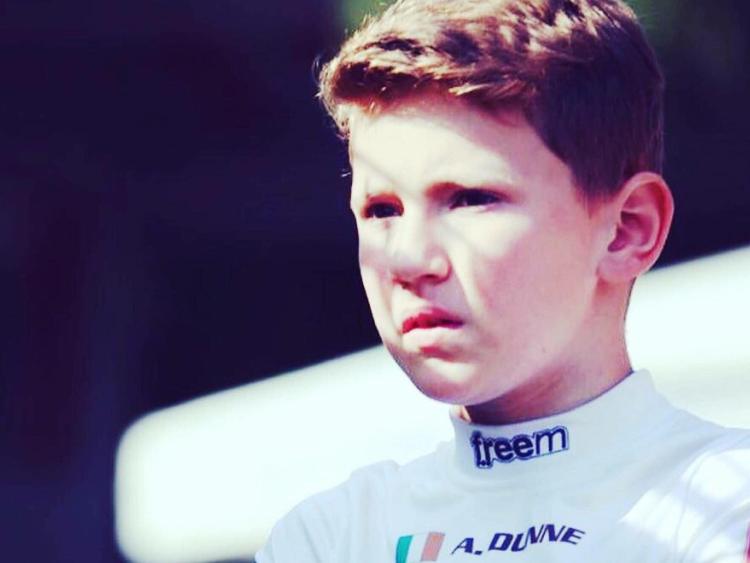 Clonbullogue karting star Alex Dunne had another very positive weekend as he builds towards his second season in the European Karting Championship.

Having shown excellent pace throughout the event the teenager left the track with renewed confidence, despite failing to finish the final, where he was knocked out of the race while challenging for a podium position.

The Dublin born teenager had one of the strongest weekends of his karting career so far, as he qualified on the front row of the grid for his four heats. Racing in a very competitive field, Alex started steadily in each of the qualifying races before battling his way up to second place in the first three races and then hitting the top spot in the final heat.

The Newbridge college student's performances in the heats left him second of the almost ninety drivers taking part, giving him pole position for Super Heat two, the results of which would be added to the heat results to decide the final grid.

Alex's Super Heat started well, as he led the opening couple of laps, but it soon became obvious that he was struggling as he was constantly defending his position. Eventually, the pressure told and one by one his rivals found a way past as he dropped to tenth place due to a down on power engine.

With a new motor installed for the final, Alex was looking strong again and was in the thick of the lead battle straight away. Initially up to fourth, the Clonbullogue youngster was pushed back to fifth on lap two but remained firmly in contention. As he lined up a move back to fourth place at the end of lap three, a coming together between the two drivers in front of him saw one spin across the road into his path, taking Alex out of the race.

Despite his non-finish Alex was delighted with the way the weekend went, saying: “The weekend was really good right up until the final. I went well in qualifying and drove consistently well through the heats so there are lots of positives to take away from the event."

"The engine problem in the Super Heat dropped me back a bit for the final, but I was feeling really good and ready to move towards the front when I was unlucky to get caught up in someone else's accident. We'll be back here in less than a week for the second round of the Super Masters Series and I aim to be right back at the front once again.”

Alex Dunne's season continues with the second of four WSK Super Masters Series rounds next weekend, once again at Garda in Italy. The youngster's progress can be followed on his website www.alexdunneracing.com and on social media.