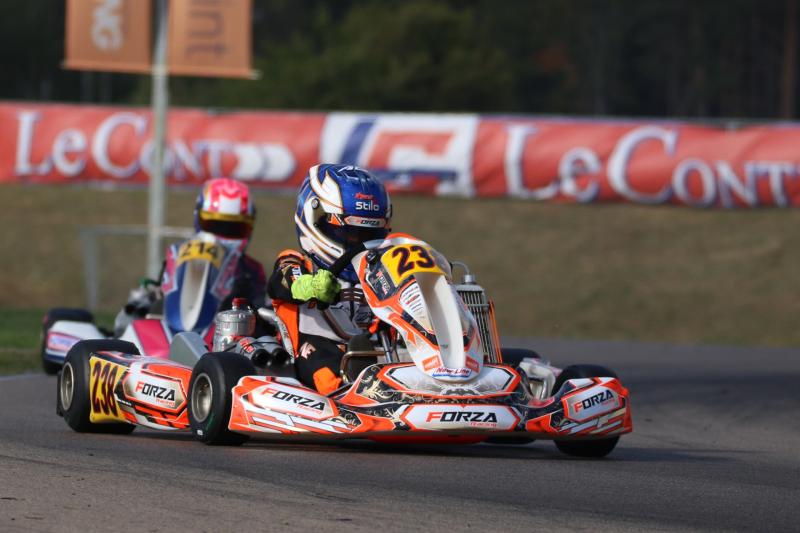 The opening round of the WSK Super Masters Series, at Adria in Italy, was a tough one for Offaly karting star Alex Dunne.

Having been fastest in pre-event testing, his race weekend was almost ruined by mechanical issues and contact from his rivals, before a brilliant recovery drive nabbed him 18th place in the final.

Qualifying took place in the wet, meaning a change of kart, and Alex was not as happy with the wet weather chassis as he had been with his normal one, leading to seventh fastest time for the Clonbullogue teenager.

The opening heat also took place on a wet but drying track and Alex performed well in the difficult conditions to climb as high as fourth before eventually finishing fifth. Similar conditions in heat two saw Alex again run as high as fourth, but towards the end of the heat he began to struggle for pace and dropped down to eighth at the flag. Alex's drop off in performance was later explained when the team found that his chassis had broken, meaning a quick repair was required before the third heat.

Heat three was the turning point of the weekend for the Offaly racer as a non-finish, caused by being rammed from behind, interrupted his string of competitive performances and damaged his chances of a good starting position in the pre-final. The heat three non-finish meant Alex went into the final heat with an untried set-up on his kart and despite initially making progress he once again dropped down the order as he adapted to the different feel of his chassis, eventually finishing fourteenth.

When the heat results were combined the Irish youngster was left in thirtieth place and with a lot of work to do from the eighth row of the grid in the pre-final. With his Kart now set up for the conditions, a strong performance in the pre-final moved Alex up the order to ninth putting him safely into the all-important final.

The last race of the weekend was the most competitive of all for the Clonbullogue native. A steady start was ruined on lap four when contact from behind put him off the road and down to 23rd position. A brilliant recovery drive, which included sixth fastest race lap, moved him back to thirteenth place on the road but a penalty for non-conforming bodywork, caused by being hit from behind, dropped to eighteenth at the flag.

“That was a tough weekend,” said Alex after the event. “We usually have good pace in the wet but I was struggling to keep my pace up in the opening two heats until we discovered that the chassis was broken. We got the Kart back in good shape by the pre-final and my strongest run was in the final."

"I had the pace of the front runners and I was confident I could have finished in the top five if I hadn't been knocked off. It was an up and down weekend but my performance in the final was very positive so I can only look forward now to my next outing in two weeks time.”

Alex will be back in action in a non-championship race at Lake Garda in two weeks, before returning to Adria for round two of the WSK Super Masters Series the following weekend.

To keep track of Alex's progress see his website www.alexdunneracing.com where you can find links to live streams and results from all of his races.