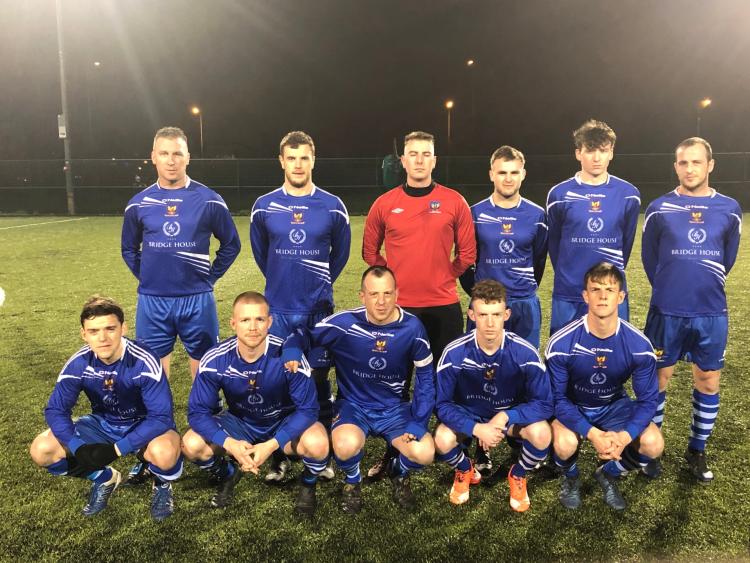 Tullamore drive on for victory over Dublin Bus

Tullamore drove away from Clondalkin last Friday night with all three points following a late double-decker demolition by ace marksman Macdarragh O’Neill as a very good Dublin Bus side were left stranded on the hard shoulder.

Played in wintry conditions on their all-weather pitch the Busmen set about their task with real relish as Sean Maher cut in from the left and had his effort deflected narrowly wide.

The visitors quickly got up to speed with Robbie Bracken playing a lovely ball through to Shane Dowling but he was marginally
offside. Tullamore should have opened the scoring on 7 minutes when Shane O’Connell sent Bracken clear on goal but his shot was parried by Sean Gorman with Shane Dowling driving the rebound wide.

They again went close when Dowling and Brian Francis combined to pick out Robbie Bracken in the area but his effort came crashing back off the crossbar. The home side hit back with Eoin Lannigan heading Gareth Kenna’s corner wide and then Oscar Sibanda’s 30-yard effort was well held by Conal Sheeran down low to his left.

Bracken’s direct running was causing major problems but, with 22 minutes gone, the Busmen jumped into the lead when Jamie Ahern chased down a long clearance and pulled the ball back for Eoin Lannigan to fire home. Tullamore nearly equalised when the home keeper misjudged Brian Norris’ free-kick but the ball flew outside the right post.

Great play by Robbie Bracken saw him pick out Shane O’Connell but his effort was tipped around the post and, from the resultant corner, Macdarragh O’Neill’s in-swinging effort came back off the crossbar. As the game continued to ebb and flow Jamie Ahern’s long-range shot was beaten out by Conal Sheeran while, at the other end, Robbie Shine’s freekick was headed narrowly wide by Shane Dowling.

The home side twice went close when Daniel Gleeson picked out Sean Maher but Sheeran saved at his near post and then Eoin
Lannigan flashed his effort past the left post. With minutes remaining in the first half Tullamore nearly levelled when Macdarragh O’Neill got on the end of a great ball from Robbie Shine but his early strike was well taken by Sean Gorman as the interval arrived with Dublin Bus one goal to the good.

The home side went straight for the jugular on the restart with Conal Sheeran doing well to block Eoin Lannigan’s effort and, as the ball broke loose, Sheeran recovered to bring off a superb point-blank save to deny Karl Laffin. They again went close when Sean Maher picked out Liam O’Dwyer and his cross was headed narrowly wide by Aaron McGurk.

The introduction of Jack Goodings into midfield on 55 minutes had a real steadying effect on Tullamore as they began to slowly regain their grip on the game. He was quickly into the action when lovely play saw him thread the ball through to Shane Dowling but Stephen Byrne got across to cut out the danger and then Robbie Bracken played in Brian Francis but he fired past the far post.

With 70 minutes on the clock they hit back when Goodings got on the end of Robbie Shine’s free kick and crossed low into the box for Macdarragh O’Neill to force the ball home from close range. Dublin Bus nearly restored their advantage when Sean Maher picked the ball up on the left and drove it across the face of the goal but, with 5 minutes remaining, it was Tullamore who struck for the winner.

Jack Goodings swept the ball out to Macdarragh O’Neill on the left and he fired in a vicious cross-shot that the keeper could only help on its way into the net. The home side had a shout for a penalty when Maher was bundled over in the area but it was the visitors who finished stronger with Brian Gill just failing to pick out O’Neill in the area as the referee brought an exhilarating game to a conclusion.

This win lifts Tullamore into fifth place in the table and fires them back into the promotion race as they approach the halfway point in the league. Manager Tony O’Sullivan is planning a busy training schedule heading into Christmas as they prepare for a number of home games in the New Year.

In what was an outstanding team performance there were exceptional contributions from Ross Kinnarney, Jack Goodings and Macdarragh O’Neill, but the man of the match award was shared between Conal Sheeran and Robbie Bracken.