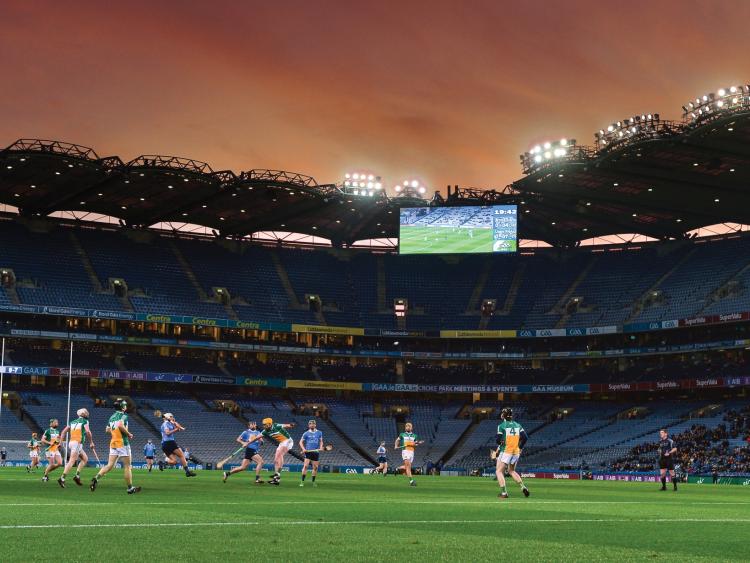 Offaly's famous 13-point victory over Dublin in the 2018 Allianz Hurling League is featured in the new 'A Season of Sundays' photography book.

On the back of an emotional roller-coaster of a GAA season, Sportsfile has launched their twenty-second annual ‘A Season of Sundays’ book. In a year that saw Limerick end a 45-year wait for the Liam MacCarthy Cup and Jim Gavin’s Dublin win their 4th All-Ireland in a row, the eagerly anticipated book looks back at all the memories throughout the year.

The 156-page hardback ‘coffee table’ book has in excess of 275 images of the 2018 Gaelic Games year from the talented team of Sportsfile photographers, with text by Alan Milton from the GAA. The book retails at €24.95 and is available now at bookstores nationwide.

This year’s instalment captures the highs and lows of the GAA in another bright and absorbing season which includes images from Offaly. In 2018 we were treated to what was arguably one of the best hurling championships’ in recent times. The revised structure resulted in more thrilling games and more talking points for the duration of the summer. Ultimately Limerick came out leaders of the pack with Joe Canning’s 70 meter free falling just short for Galway in the remaining seconds of a hugely exciting All-Ireland final.

In the football, there was no stopping Jim Gavin’s Dublin as their strength and depth kept them on track to compete for a historic five-in-a-row in 2019. Monaghan were the surprise package of the summer, just missing out on reaching only their second All-Ireland final to a very strong Tyrone side.

Sportsfile was also on hand to capture Sinéad Aherne lift the Brendan Martin Cup as Dublin reclaimed their title in front of a record-breaking crowd at the Ladies Gaelic Football Final. While in the Camogie, Cork overcome Kilkenny by one point to bring the O’Duffy Cup back Lee Side for the 28th time in a dramatic repeat of last year’s final.

Last year’s edition of ‘A Season of Sundays’ was recently nominated for a ‘SPORTEL Award’ which was presented at the annual SPORTELMonaco Convention in Monaco.  Known as the “Golden Podium Awards” - the trophies are presented in an international competition that rewards the most outstanding sports images of the year.

Speaking at the launch, the book’s creator Ray McManus said: “The GAA season never fails to deliver and once again I am proud of the collection my team at Sportsfile has assembled. Across all codes and competitions, we have captured some truly remarkable moments and it is a privilege to unveil them in our book each year.”

Uacharán Chumann Lúthchleas Gael John Horan said: “The eagerly anticipated annual publication of 'A Season of Sundays' heralds the onset of winter and the concluding stages of another hectic year of football and hurling activity. Its reputation precedes it and that's what it has been become a much sought-after inclusion in the collection of so many people who follow our games. Everyone will have their favourites in this year's offering and the green hue throughout will sit well with Limerick and neutral hurling followers alike. Similarly, the incredible images that accompany Dublin's march to a fourth consecutive crown will be treasured in the capital.

"I heartily congratulate Ray and the Sportsfile team who never fail to reach the high standards they have set for themselves. It's a yearly image-driven treasure trove and I am delighted as GAA President to welcome its arrival on the shelves as another memorable year starts to wind down.”

John Comerford of the book’s sponsors Carroll’s of Tullamore added: “We are delighted once again to sponsor ‘A Season of Sundays’. Each year the publication serves up a feast for the eyes and this year is no different. The book has captured a wonderful selection of images that brings the GAA season to life in a unique and inspiring way. As Ireland’s favourite ham brand, we are proud of our long-standing partnership with ‘A Season of Sundays’."

"We have deep roots in GAA as proud sponsors of the Offaly teams for over 25 years now, this publication is an extension of our connection to the GAA community across the country. I wish to congratulate Ray and his talented team on another fantastic edition looking back on what really was a captivating season of GAA.”

It would make the perfect Christmas gift for any GAA fan, retailing at €24.95 from bookstores nationwide and online at www.sportsfile.com.